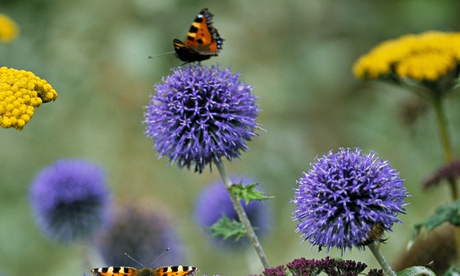 An echinops attracts a butterfly. The flowers look lovely in the garden and look quite something in a vase. Photograph: Clive Nichols/Getty Images/Gap RM

If I got to rule for a day, I think I would put short fences into my first diktat. I am quite sure I wouldn’t like my neighbours half as much as I do if it weren’t for short fences. They allow for chance encounters, incidental chit-chat, the sort of thing that makes a neighbourhood. Also, I can enjoy their echinops while sitting in my own garden.

Echinops, the blue hedgehog thistle or globe thistle, is a perfect sphere of blue that appeals to every pollinator around. I counted three different bumblebees, four hoverflies and a honeybee as I said good morning (to them and the neighbours). There’s something very pleasing about a big, fat bumble stuck on a pincushion of a flower.

When not looking lovely in the garden, they look quite something in a vase, both in flower and afterwards, when you are left with a washed blue seedhead. They last a long time, too, particularly if you change the water often.

The species Echinops ritro is lovely if you have space to let it roam – in a wild or gravel garden, say – but it can be a bit much for smaller spaces, because it tends to self-seed rather a lot. Likewise, E. sphaerocephalus, with its large, blue-grey flowers and steely-grey foliage, is lovely as long as you don’t mind it seeding itself around. Still, you can often employ the local bird population to strip the seedheads, which keeps the weeding down. A better bet, maybe, is E. ritro ‘Veitch’s Blue’. It has purple-blue flowers, rarely self-seeds and grows almost anywhere, as long as there’s some sun. E. bannaticus ‘Taplow Blue’ is another that remains contained and easy to please. It is tall, at 1.2m, and will grow in sun or part-shade, in clay or gravel, and won’t topple over. The flowers are a stately grey-blue; it makes rather a good statement plant.

E. bannaticus ‘Blue Glow’ has perhaps the most intense of all blues, so is brilliant for flower arranging. It will self-seed, but that shouldn’t pose much of a prolem, because everyone coos over it.

The purple hues in the blue of echinops look great with pinks such as brook thistle Cirsium rivulare ‘Atropurpureum’ or among astrantias and echinaceas. Or go the other way and put them with yellows and oranges: among day lilies and achilleas, for instance. There’s a good Piet Oudolf trick whereby you pair the upright purple-blue towers of agastache among a drift of round echinops.

Echinops is tolerant of quite a wide range of soils, provided the top layer around the base of the plant drains well. I have seen it thrive on getting its feet deep into clay and do equally well in the thinnest of soils. My favourite thing after those lovely blue balls is that the slugs do little damage.