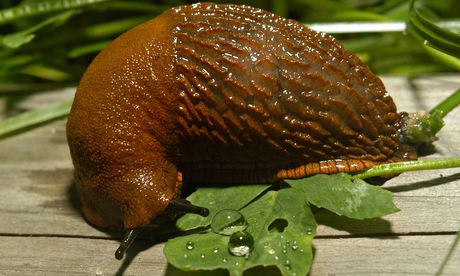 ‘Slugs’ role in the ecosystem is to keep the tide of green at bay.’ Photograph: Alamy

This spring, I had two huge opium poppies, far larger and more exuberant than you’d expect for the time of year. They grew side by side in a pot on the patio. The good compost and the sheltered, sunny position gave them an unnatural head start.

I was impressed by their size, but not by their position: that pot was destined for potatoes. As it was early in the year, I decided to transplant them into the garden. I went carefully about the task, watering them in well, offering a little protection for the first few nights. All looked well and I thought little more about them.

A month or so later, I realised one had vanished. When I went looking for the other, it barely resembled a plant; it had been ravaged from its heart out, only tattered midribs remained. Opium poppies are rarely touched by slugs. What pulses through their veins is usually repellent to slugs. I’ve never seen one more than gently nibbled; I was shocked to see one gone entirely and the other not far behind.

As spring unfolded and the slugs started up their business again, I thought about these poppies. The slugs here were doing exactly what slugs should: taking out the weak and clearing up the debris. My choice to move the poppies had been foolish: I had stressed the plants, weakened them.

Slugs’ role in the ecosystem is to keep the tide of green at bay. Without them, we’d be drowning in half-rotting vegetation. They are the garbage collectors of the garden.

When I look at them in this light, as they take out some seedlings but not others, eat half a tray but mysteriously leave a few standing, I start to wonder if they are doing me a favour. Sometimes I can recognise the ailing and sick, but often I can’t till it’s too late. My desire to nurture every seedling, the stragglers and the weak as well as the healthy, isn’t productive. Perhaps the slugs are playing a valuable role that I can’t.

Those tattered poppies have taught me something valuable. Every day in my garden, the many beings that make it up vote for the system. When a slug takes out a seemingly healthy plant, it’s perhaps casting a vote for what should or shouldn’t belong in this space. It’s a gentle reminder that this garden doesn’t belong solely to me.

There’s a long litany of what can go wrong when raising a plant. The slugs are just there to teach me how to recognise them. I am not sure why it’s taken me so long to get here, but for the first time in my life I am very grateful that certain things slime over my world.