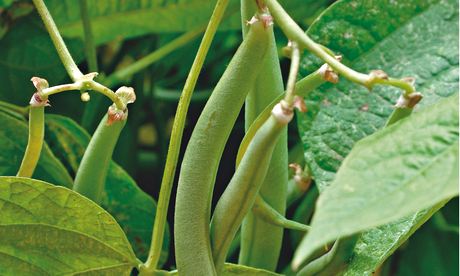 Dwarf beans: ‘The modern versions grow to no more than 45cm.’ Photograph: Alamy

I love the look of a row or teepee of beans, a thousand green handkerchiefs waving in the wind, flowers peeking out, and all those wonderful beans hidden in the recesses.

Until, that is, the wind topples my “I’m sure they are strong enough this year” structures. Then I curse the leaves that act like sails, and all those beans weighing them down.

Last year, I did away with the wobbling by drastically shortening the plants: when they were 15cm high, I pinched them out, effectively dwarfing a climbing bean so that it reached only around 60cm and was much easier to pick.

This is an old market garden trick you can try on any climbing beans – french, runner, borlotti or shelling. When they start to bolt to the sky, keep pinching them back. The plants’ response is to branch in a desperate bid to produce flowers. This is useful for windy sites such as balconies or roof gardens (or my windswept allotment).

Or grow true dwarf beans. The very modern versions grow to no more than 45cm and are self-supporting; the older varieties are 60cm or so and will need pea sticks to avoid becoming slug fodder or being covered in a fine film of soil splashback that’s a bore to scrub off.

Sow dwarf beans 15-25cm apart in each direction. They tend to mature faster than their climbing siblings. Use this to your advantage by making several sowings: this month, again in June and right up to mid-July if you are prepared to cloche in autumn. Sow two or three beans per station, thinning as necessary (the thinnings easily transplant).

Dwarf beans are ideal for containers. I often sow a ring around the outer edge of my larger pots, allowing the beans to hang over the edge. I put something upright in the middle; kale, chard, basil and lettuce all benefit from the extra nitrogen beans bring to the soil. I love the runner bean ‘Hestia’ for this. It’s fast-growing and compact with a pretty red and white flower.

I also grow dwarf borlotti beans because they are more reliable if the summer is less than hot (try ‘Borlotto di Vigevano’ or ‘Stregonta Nano’ from Franchi Seeds). They crop a bit earlier, and if the weather is foul, they are easy enough to cloche or cover with fleece.

Last year, I grew ‘Green Arrow’, a dwarf french bean bred for the British climate (available from Sea Spring Seeds). It’s bred for all sorts of disease resistance and is a strong grower. I sowed three times from May to July and picked well into autumn: every bean was perfectly straight and vivid green. A most satisfying crop.