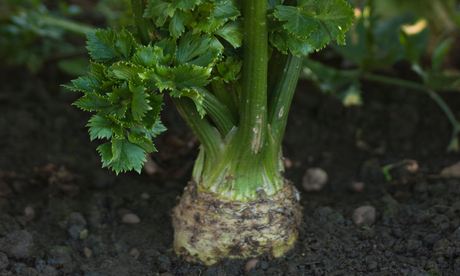 ‘Last year, I thought there would never be a moment when I would shout, “No more celeriac!” But it came.’ Photograph: Alamy

Celeriac is a very fine thing; too fine, in fact. Last year, I thought there would never be a moment when I would shout, “No more!” But it came. I tried a recipe from Noma chef René Redzepi, who cooks a whole celeriac, scrubbed, not peeled, in a sea of butter until it tastes complex, rich, almost meaty. It did taste quite something, but it was still celeriac (albeit drowned in butter). It wasn’t the recipe’s fault. I’d just seen too much of celeriac that winter.

At the beginning, when our urge to fill space with life is most pressing, it’s hard to imagine there will ever be enough. It’s easy to sow too much, and seedlings are so sweet, it seems wrong not to prick out and pot them all on. What starts as a novelty can quickly become a chore to eat. Sometimes you can’t help but end up with a lack of variety, particularly if crops fail or don’t store, especially over the winter. But summer (even a wet one) is more generous, and the garden should offer up a procession of different vegetables so you never bore of one or the other.

The basic rule is to imagine how much of something you want to eat, how often a week, and then consult a good book on yields. Dr Hessayon’s The New Vegetable And Herb Expert has tables for yields, plus how long the seed will store, so you know whether to use up a packet or save it for following years. Joy Larkcom’s Grow Your Own Vegetables has easy plans with quantities and sowing dates. I particularly like Eliot Coleman’s Four-Season Harvest, because his whole take is about picking young vegetables, so there are practical tips on how often you should succession-sow. (It’s written for North America, so you have to consider their long, hot summers.)

Concentrate on growing expensive or hard-to-buy varieties, rather than mounds of bog-standard onions, carrots or potatoes, which will eat up space. And pace your sowing with care. Most people are defeated by 10-foot rows of beans that end up unloved in the freezer. I prefer to sow short rows of dwarf French, borlotti and runner beans successionally in three batches, one at the end of this month, one in mid-June and another in July to keep a continual, manageable harvest.

Four courgette plants are more than enough for a family and you’ll still end up giving some away. If possible, grow four types – one ball, one pattypan, a long green, perhaps a yellow type – so that at least you have a variety of shapes. Jungle Seeds offers a mixed courgette collection with 25 seeds, which could be shared between growers.