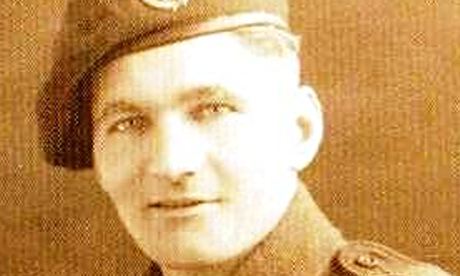 My father Andrew “Drew” Brown, who has died aged 94, was one of the few remaining glider pilots to have survived the Battle of Arnhem in 1944.

Flying a Horsa glider carrying a jeep and five soldiers, he took part in Operation Market Garden, Field Marshal Montgomery’s plan to secure the strategically vital bridge crossing the Rhine at Arnhem in the Netherlands.

It was a military disaster; against all intelligence reports, the chosen landing zone was close to a resting SS Panzer division. After the allies had suffered a week of terrible casualties, Montgomery ordered a rescue of the trapped troops and Drew – who had fought alongside his colleagues after landing near Arnhem with troops and equipment – was among the lucky few who escaped back across the Rhine in a ferry boat on the night of 26 September 1944. Of 11,920 British troops who had landed, only 3,910 were evacuated; of the 1,378 glider pilots who set off for Arnhem, 229 were killed and 469 were wounded or taken prisoner.

Drew, who had joined up with the King’s Own Scottish Borderers at the outset of the second world war but then switched to the Glider Pilot Regiment, was mentioned in dispatches and received shrapnel injuries at Arnhem. But within a few weeks he was patched up and sent off to Belgaum in India to join No 671 Royal Air Force Squadron, flying supply missions in the fight against the Japanese in Burma. During his time in the forces he also enjoyed success as a boxer and footballer for his battalion.

Before the second world war Drew had worked as a bothy boy, labouring in the gardens of stately homes at Ford and Lennel in Northumbria and in Musselburgh in Scotland. After the war he developed his interest in horticulture at the Royal Botanic Garden in Edinburgh, where he met Janet MacLarty, whom he married in 1955. He then pursued a career as a horticultural adviser for the ministry of agriculture in Cawood (Yorkshire), Stevington (Bedfordshire), New Milton (Hampshire), Cambridge and finally Newcastle, before retiring in 1982.

Drew led an active life in retirement, lecturing in landscape gardening at the University of Newcastle and playing a key role in the pioneering Sheltered Housing and Workshops Project in Cramlington, Newcastle, in the 1980s, which provided homes and employment for people with disabilities. He proudly led Diana, Princess of Wales on a tour of the project in 1989.

Born in Blink Bonny in Northumbria, Drew went to school in the Scottish border town of Coldstream. He had the toughest of upbringings as his father, injured in the first world war, died young, leaving his wife to bring up three small children. But determination was a core part of Drew’s character. Having seen so many men die at Arnhem, he valued every day that came after September 1944 and on two occasions he made pilgrimages back to the site of the battle, where he was overcome by the gratitude of the Dutch people. He held strong Christian beliefs throughout his life and was an equally passionate Newcastle United fan.

Drew’s youngest son, Don, died in 1982 and Janet predeceased him in 1993. He is survived by his other two children, me and Kathleen, and by four granddaughters, Isla, Maeve, Grace and Flora.