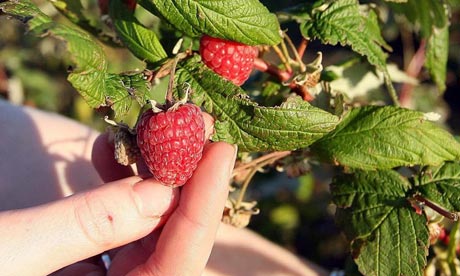 Raspberry leaves may start to look tatty by the end of the season. Photograph: Owen Humphreys/PA

We are in despair over our summer raspberries, whose leaves turn yellow over the growing season. It is galling because the wild raspberries in the garden look healthy.
If you’ve had a reasonable crop, it’s unlikely they’re at death’s door. Let’s clear up the raspberry’s natural cycle: the leaves start off green but, as the season progresses, the plant’s energy turns to fruit. The leaves start to yellow; they get hit by wind, rain and scorching sun. At this point, though, there should be berries to distract you. Wild raspberries also tatter, but less so, because their tiny fruit are far less of a draw on resources.

However, a distinct yellowing of the leaves, particularly between the veins, is most likely to come from a lack of iron, or just possibly magnesium. Such deficiencies are often caused by too much water, or too little; compaction or competition from other plants aggravates the problem. You can apply iron sulphate this autumn (and epsom salts for magnesium), but I’d look to competition first, perhaps from a lawn or large tree, or insufficiently thinned new canes.

• Got a question for Alys? Email askalys@theguardian.com

• This article was corrected on 7 October 2013 to remove references to manganese: the element in question was magnesium. The picture of loganberries was removed and replaced with a photograph of a raspberry bush.