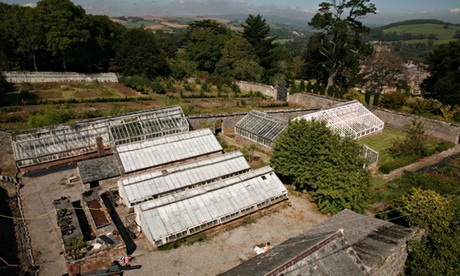 The walled garden at the Flete estate in Devon. Photograph: Andy Byfield

Quiz my parents and I am sure that they will tell you that my eyes are bigger than my stomach. Where my good friend Ian eats half of one supermarket sandwich before stashing the remainder in the fridge for the next day, I scoff two rounds in an instance, and throw in a Mars bar for good measure (before you ask, yes, he is slimmer than me).

And so I am as a gardener. I confess to being afflicted by an addiction to collecting plants, with silly numbers of snowdrops, hepaticas, cyclamen – even winter aconites, heaven forbid. But now even I wonder whether I have bitten off more than I can chew, for a few years back, I took on the lease of a walled garden on the Flete estate in south Devon.

There has been a house at Flete since Tudor times, perhaps before: it lies at the tidal limits of the River Erme with the sea just three miles to the south, and the massif of Dartmoor looming little more than five to the north. The estate may be strangely familiar to readers, for it has formed the backdrop to films such as International Velvet, Scum, Sense and Sensibility and many more. As for the walled garden, the main section was built in the 1790s, only to be increased during the latter part of the Victorian age as the proceeds of successful banking, sheep farming and much else flooded in. The walled garden today covers roughly two acres: its stone walls, outbuildings and greenhouses create a fine example of Victorian gardening at its elegant best. Anyone who walks through the gates is blown away by the place’s sense of magic.

This, then, is the canvas upon which I am going to develop a dream garden over the next two decades. And what a canvas! 600m of walls, all 3m in height and of all aspects, will allow me to grow fruit and ornamentals to my heart’s content. Seven surviving greenhouses can grow exotica from all climes of the globe. Long pathways beg for long borders, with views to the mellow Devon countryside beyond. Like so many gardens of this age, the walled gardens at Flete produced fruit and vegetables, cut flowers and pot plants – all of prize-winning quality, I am certain – for the main house and the owner’s other houses in London and beyond. I want to be faithful in reasonable part to this past history – although two acres produces more than enough vegetables for one person – but above all, the design must enhance the beauty of this place.

I can’t deny the panic attacks that overcome me at the thought of the sheer scale of effort needed to transform this garden. Only this last month, the winds have whisked away nearly fifty panes of the glass from the enfeebled greenhouses, adding to the list of urgent jobs. But when I am weeding among daffodils, scillas and irises in the hazel grove in the first serious warmth of the year, or admiring my first efforts at restoring a 50ft greenhouse more than 100 years old, I am overcome by a sense of calm. I really am one of the luckiest people around. I am in for the long haul, and, through these blogposts, I really hope that you will join me for the ride.