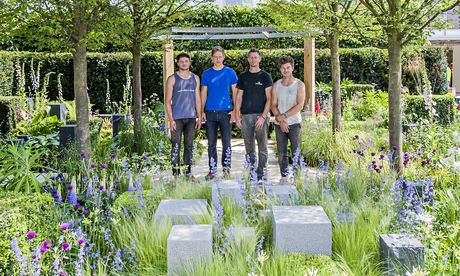 At the tender age of 27, Hugo Bugg has received an accolade few garden designers dare hope for in an entire career. On Tuesday he became the youngest garden designer to achieve a gold medal for a show garden at the Chelsea Flower Show. He may also have been the first designer in the show’s illustrious history to tweet “Frickin GOLD!!! #rhschelsea” on receiving his medal at 8.30am.

His RBC Waterscape Garden is a combination of message and aesthetics designed to highlight the work of the Royal Bank of Canada’s Blue Water Project, a 10-year commitment to help conserve the world’s fresh water resources. Gardens with a message are notoriously hard to pull off, but Bugg said he enjoyed the brief.

“It helped me. It was a perfect brief for a show garden really, and I like taking a concept and finding ways of simplifying it and making it accessible and good to look at,” he said.

Water trickles and pools through the garden – between smooth concrete and on-trend Corten steel walkways – and were this not a show garden would seep slowly into the earth, rather than heading for the drains.

Bugg said: “In light of the severe flooding we’ve seen in parts of the UK, I wanted to demonstrate how even inexperienced gardeners can manage the water used in their gardens through simple techniques. The garden challenges visitors to take responsibility for managing water usage.

“It mimics nature’s way of slowing down water, encouraging infiltration into the ground and taking pressure off urban drainage systems. Hopefully it will draw people’s attention to what can be done to harness rainfall, put it to good use and encourage natural filtration throughout a garden, particularly in urban environments.'”

Bugg grew up in Devon and was inspired to turn his hand to garden design when his parents moved to a cottage with large gardens. “I worked with my father on an ambitious project to restore the gardens. Watching the new landscape emerge was so exciting,” he added. He graduated from University College Falmouth with a first class degree in garden design in 2008, the year that the Society of Garden Designers named him Student Garden Designer of the Year. He now runs his own company, based in Exeter.

This year, the horticultural world is aquiver over a brace of young men taking the Chelsea show gardens – the big, vastly expensive set pieces upon which the TV cameras linger longest – by storm.

Brothers Harry and David Rich, aged 26 and 23 (David is the youngest designer to exhibit on the show’s Main Avenue), achieved a silver gilt medal for their Night Sky Garden, a shimmering evocation of the Brecon landscape where they grew up. Silver gilt medals also went to show gardens designed by Matt Keighley, 29, who created a beautifully planted if sombre garden for Help for Heroes and by Matthew Childs, 30. Even though the most coveted award, Best in Show, went to seasoned Chelsea designer Luciano Giubbilei, the sense of a new front is hard to dismiss. 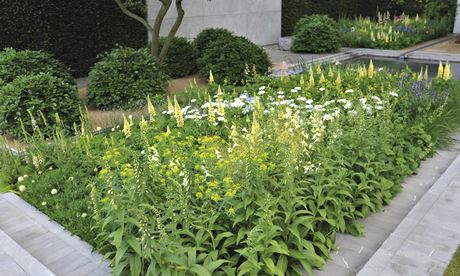 A detail from the Best in Show garden, designed by Luciano Giubbilei. Photograph: Michael Preston/Corbis


All of this has not come about by chance. The Royal Horticultural Society exists to promote and further the cause of horticulture and in Bugg it may have one of its great successes. He is the product of a concerted effort by the society to encourage new talent into the garden design world and has been the next big thing since 2010, when he won its Young Designer of the Year award.

He then came through the show garden ranks, designing gardens at the Tatton Park and Hampton Court flower shows before stepping into the far brighter limelight of Chelsea. “Nothing rivals Chelsea for its heritage and worldwide reputation,” Bugg said. “I think all designers aspire to show a garden here at some point in their career. It attracts thousands of visitors and millions of viewers from across the globe so it’s an incredible opportunity to showcase what we’re trying to achieve with the garden and sustainable water management.”

This nurturing process led to his hitting his show garden build like a seasoned pro. “Nothing really went wrong on the build,” he smiled. “I have a fantastic team. There were lots of prefabricated elements so we just had to bring them in. A couple of trees didn’t come into leaf on time but we found replacements.” He seems unruffled by the process, but then he has been at this for all of four years.

He may have become the RHS’s golden boy, but he is not getting carried away with talk of the new generation. “My aim and hope was to receive the highest accolade available. I realise that now I am up against a lot of big names in the industry and it’s great that there are so many other young designers here, but I’ve really been competing against myself all along. I just wanted to ensure that this garden was of the highest standard possible.”