When Patrick Borgeot was appointed head gardener at Vaux le Vicomte in 2007, he spent long hours exploring the garden with his camera. Inside the chateau, south-east of Paris, he had come across a dozen engravings by Israel Silvestre showing the gardens when they were first laid out under Nicolas Fouquet, Louis XIV’s superintendent of finances. Borgeot tried to catch the same views, 350 years later. He wondered whether the splendour designed by the same trio who created Versailles – architect Louis Le Vau, painter-decorator Charles Le Brun and landscape gardener André Le Nôtre – had changed since the 17th century.

Apart from a few details, the overall layout of the garden is much as in Le Nôtre’s day: the central perspective from the chateau to the statue of Hercules, the pools, canal and the outline of the gravel walks are intact. But some things have subtly changed. At the start of the 20th century, Alfred Sommier, a forebear of the current owners, revived the garden, which had been neglected for several decades. He turned it into a 19th-century jardin à la française, with more complex box-hedge designs and flashier fountains than in the days of the Sun King.

There is debate now as how best to restore gardens designed by Le Nôtre: either as perfect replicas, or closer to contemporary needs. How is one to turn a historic garden into a place where we can relax, play, picnic, perhaps even indulge in some sport when enjoying the view? The gardens at Vaux le Vicomte, Versailles and the Tuileries, all laid out by Le Nôtre, reflect different approaches. The first two have opted for historical reconstruction, but the third was given a facelift in the early 1990s by Pascal Cribier and Louis Benech.

One of Vaux le Vicomte’s current owners, Alexandre de Vogue, wants to “restore the spirit and soul” of the Fouqet years. “Our baseline is 1661,” he says. That year the young king’s finance minister staged a sumptuous party in his honour, with walks in the garden, supper, comedy and ballet staged by Molière and Lully, and a huge firework display. It was probably too good. “At 6pm Fouquet was king of France, but by 2am he was nobody,” Voltaire wrote. A month after the event Louis XIV had Fouquet imprisoned. After confiscating his furniture and paintings he gave the job of designing Versailles to the same team that had excelled at Vaux.

“We want to restore the chateau to its past splendour,” says De Vogue, who manages the estate with his brother. “Indeed, that was the aim of the restoration work undertaken in 1875-1920 by my great-great-grandfather. Digging up the grounds, the workers uncovered the outline of the original garden and they kept the terraces, ramps and steps just as they were. Taking their cue from the engravings, they then set about restoring the statues, box hedges and some of the 17th-century pools. A century later we have picked up where they left off, refurbishing the Diane terrace in 2001, which had been overrun by trees. There too, we dug down and found the 17th-century foundations.”

Now Le Nôtre’s garden is once again visible. But times have changed. In fine weather thousands of visitors flock to Vaux le Vicomte, expecting to find a space in the car park, a picnic area and a playground for their children. “We have to reconcile our historical baggage with 21st-century constraints,” Borgeot explains. “In the ‘upper’ gardens – visible from the chateau – there is just one, unobtrusive refreshment bar and picnicking is not allowed. This part of the gardens must stay as authentic as possible. But last year we started allowing visitors to eat picnics beside the canal, in an area not visible from the house.” 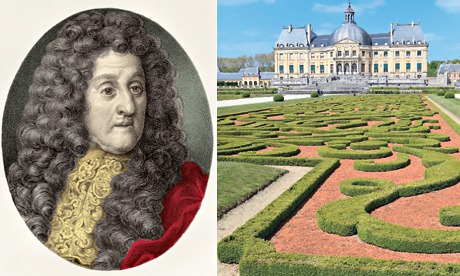 
The owners have made some other concessions to modernity, putting up signs in the garden with puzzles about Vaux le Vicomte for the kids. “If you want families to enjoy themselves in the garden, you have to cater for their needs,” De Vogue admits. “But we’ve been very careful to ensure the signs never spoil the view. We try to strike a balance: children can kick a ball about by the canal, but they must understand they’re in a historic garden. That’s why we organise guided visits, in period costume: it’s fun but also educational. The park at Vaux le Vicomte is not a museum, but it isn’t a playground either.”

At Versailles the curators have taken historical reconstruction to its limit. After the storms in 1990 and 1999 it was decided to restore the petit parc to its 1700s state. “Our guide is Louis XIV,” says Catherine Pégard, head of the public body that runs the chateau, museum and domain. “Our aim is to restore the garden to the condition described by the king in 1704 in Manière de Montrer les Jardins de Versailles. But in places any sign of Le Nôtre has long disappeared. The water theatre grove, for example, vanished during the reign of Louis XVI. That’s why I asked Louis Benech and Jean-Michel Othoniel to re-create it. But they are nevertheless following the example of the great gardener.”

Since 2013 the Latona parterre, which is overlooked by the chateau, has looked as it did in 1700. The 19th-century lawns bordered by flower beds have been replaced by ornamental turf designs by Le Nôtre. If the Midi parterre is one day restored, it will be done in the same style. “At present it has flowers, which wasn’t the case with the original parterre,” says Daniel Sancho, head of heritage and gardens at Versailles. “In Louis XIV’s day there were some flowering shrubs, but above all box hedges and lawn, offset by different coloured gravel. If we do renovate it, we’ll do something like that.”

Work is also under way to restore the banks of the canal to their 17th-century state. The linden trees, which have been strictly pruned since the 1980s to form a screen, will be allowed to grow freely, as in the old days. Many of the large trees have been cut down since the storms 20 years ago, partly because they were fragile, but also because Le Nôtre pruned them. “To maintain the elegance of the garden, we’re working on a standard height of between 17 and 23 metres,” Sancho explains. “So we need to find species that don’t grow too high. In a formal French garden, trees are not meant to block the line of sight: they must not spoil the views designed by Le Nôtre.” 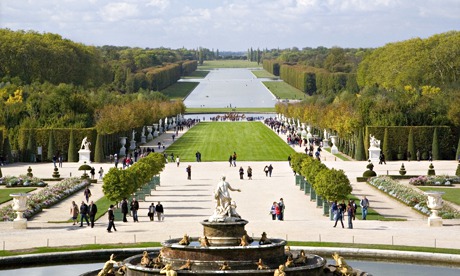 
There are, however, drawbacks to restoring the gardens to their original state. Despite the “keyhole” rule, which gives the official architect a say on any projects within a 5km radius of the chateau, the landscape has inevitably changed. “There was no need for Le Nôtre to use tall trees as a screen to conceal the environs: on the contrary, he liked to create views of the surrounding countryside,” Sancho adds. “In 2014 the picture is obviously different. In some places you can see the RER [suburban train] line or the car pound. So in some cases the trees in the outer park shield us against visual pollution, which is handy.”

The Tuileries garden, in the centre of Paris, has taken a very different route, but then its history has been more turbulent. Originally laid out in 1561 by Catherine de Medici, it was redesigned by Le Nôtre in the 1670s. In 1831 Louis-Philippe fenced off part of the site for his private use, an area extended by Napoleon III. At the end of the Commune, in 1871, the adjoining Tuileries palace was burned down. So although the place is associated with Le Nôtre, Cribier and Benech rejected the idea of an exact reproduction. “We didn’t want to produce pseudo-Le Nôtre,” Cribier says with a smile. “It makes no sense trying to tie a garden to a particular era.”

The landscape designers only kept the broad lines of Le Nôtre’s layout: the central alley, which leads the eye towards the Champs Elysées, the octagonal pool bordering Place de la Concorde, the trees planted in the 19th and 20th century in the middle of the gardens, the terraces bordering the Seine and Rue de Rivoli, and the three pools near the Carrousel triumphal arch. “Le Nôtre, who was a genius with space, created an underlying structure based on the laws of optics,” Cribier explains. “His garden is a geometrical box in which everything is perfectly organised. He created cubic metres [of space], not square metres: his gardens give us wings. We had no intention of touching that, in fact we wanted to amplify it.”

Otherwise their approach was completely contemporary. “In Le Nôtre’s day the Tuileries was mainly gravel and stone, surrounded by countryside,” Cribier says. “So we did the opposite. As it’s now an urban garden we wanted to make it as green as possible. We planted 1,500 trees and doubled the size of the lawns.” To enhance this impression of greenery, the designers put a slight camber on the turfed areas. “It makes them more visible. When you look at the garden you get the impression the grass is eating up the paths,” Cribier asserts.

Cribier and Benech changed the layout in some places, in order to create “a pleasant spot where people could stop and rest in the middle of Paris”. They planted new tree varieties, laid out flower beds and new groves. “We were very keen there should be lots of seats and that walking around the place should be easy,” Cribier explains. “To enjoy somewhere, you need to feel free: you need to be able to discover new perspectives or read quietly under a tree.”

The renovation of the Tuileries garden was completed some years ago, but the adjoining Louvre is still working along similar lines. “We plan to add even more greenery to the Tuileries,” says Sophie Lemonnier, head of architecture and gardens at the museum. “We don’t want to spoil the view – the lines of sight laid out by Le Nôtre haven’t changed in 400 years – but 21st-century walkers like to be surrounded with greenery. So we’re going to train shrubs up the walls, which are currently bare, add an extra line of trees in the central alley, and plant smaller trees in some of the flower beds.”

Le Nôtre is still here in spirit, but no longer slavishly imitated. Indeed last year’s exhibition marking the 400th anniversary of his birth was not extended. “There were signs in the garden explaining how the various parts looked in the late-17th century,” says Lemonnier. “We thought about keeping them, but in the end we dropped the idea because we don’t want to put too much emphasis on Le Nôtre. The garden is not exactly the same as it was then, it’s a public space which has adapted to contemporary tastes.” The people strolling there are well aware of its historical significance, but it is also a playground for local children and a place where Parisians can take the air.

This article appeared in Guardian Weekly, which incorporates material from Le Monde