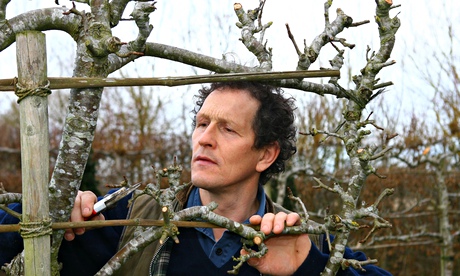 A new series of Gogglebox in an ambitious new Friday slot was the TV event of last night. But it is edited late, and preview copies weren’t available in time for old-fashioned print deadlines. So we’re left with Gardeners’ World (BBC2). That sounds like it’s some kind of bum deal. Not a bit of it. I love Gardeners’ World, even if it isn’t my world. Yet.

It’s spring, the hell-waters have subsided, the sun is shining, the birds are singing, the primroses (possibly, some yellow flowers, anyway) are out. And Monty’s walking through a lovely woody bit of his garden with his lovely retriever and a lovely mug of steaming tea. That’s a kind of paradise, isn’t it?

I was actually thinking of doing some work in my garden this weekend – what should it be, though? Monty suggests planting some pulmonaria (lungwort for the non-Latin speakers), “one of those modest spring plants that’s never going to be the star, but is always going to be playing a really important role”. Jared Leto then, not Matthew McConaughey – that’ll do me.

I should also be pruning my late-flowering clematis, Monty says. And sowing chilli and pepper seeds in one of my warmer outbuildings. It needs to be at least 20C. What? That’s warmer than inside my actual house. And where are my outbuildings? In another sunny place, I need to be chitting my potatoes. Chipping surely? No, chitting, he says.

OK, so maybe I’ll do the potato chitting and the pepper and chilli planting next weekend. For now, I’ll just tidy the place up a bit, rake away the leaves and the cat shit. It’s clear that I’m not really anywhere near up to the level of Gardeners’ World.

But it doesn’t matter. I can still appreciate this lovely boggy garden in Pembrokeshire, where a grand lady called Christina grows eccentric-looking plants. I can marvel at the man who devoted 10 years to writing the seminal work on the crocus, and becoming possibly the world authority on the flower; I can enjoy the hybrid tea roses, and Monty’s wholesome earthiness. And dream that maybe one day my own garden will be nicer.

That – for most of us – is what Gardeners’ World is really about, isn’t it? Dreaming. Planting the seeds of ideas that will never come to anything. And that’s just as good as watching other people watching television.