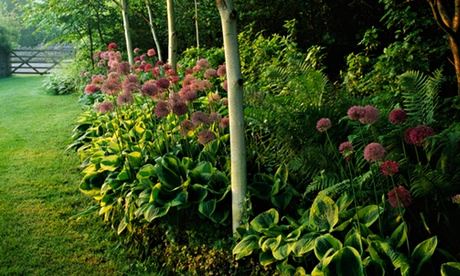 Lady Farm, in Chelwood, Somerset, is famed for its steppe-style planting. Long vistas of undulating hummocks billowing with grasses and lofty Piet Oudolf-style perennials bring eager visitors flocking from around the globe.

But the loveliest sight occurs long before the grasses get under way. In fact, it’s at its best now. Where the prairie planting is expansive, loose, open to wind and sky, this is shady, sheltered and intimate. It is a little, jewelled wood that evokes the enchanted forests of Arthurian romance – the kind of place you might see in a medieval tapestry, where you would not be surprised to find a unicorn flitting between the trees.

Best of all, unlike rolling acres of grasses, it’s something you can emulate in a suburban garden with a pair of birches, a handful of hostas and the courage to plant alliums in the shade.

About eight years ago, Judy Pearce, who owns Lady Farm with her husband, Malcolm, decided she needed a handier way down to the lake from the top of her garden. So she dug a path that wandered between a handful of silver birches to the shore, dotting around new plantings of the birch Betula jacquemontii. At intervals along the path edge she planted clumps of hostas – half a dozen of the toughest varieties she could find (low maintenance is a priority at Lady Farm) starting with bombproof old blue Hosta sieboldiana var elegans. Its stiff, rounded leaves, deeply scored and puckered, contrast with the daintier variegated foliage of H. ‘Band of Gold’, H. ‘Gold Standard’ and H. ventricosa ‘Aureomarginata’, a trio that display the hosta’s trick of changing colour over the season. ‘Band of Gold’ and ‘Aureomarginata’ have green leaves with a gold margin that fades to ivory; ‘Gold Standard’ has dark green margins and pale gold centres that change to lime, then butter-yellow, then white.

Between the hostas Pearce planted Hakonechloa macra, a shade-tolerant Japanese grass that makes shin-high tussocks of acid green, along with a handful of ferns dug up from her woods and a froth of forget-me-nots. A backdrop of Hydrangea arborescens ‘Annabelle’ extends the theme of lime and white into autumn while Cornus alba ‘Elegantissima’ contributes glowing red stems in winter, followed by creamy foliage that echoes the silky white trunks of the birches. All is lightness and prettiness. Then into this tasteful scene, Pearce throws a grenade of colour: rich purple Allium ‘Purple Sensation’ and its subtler parent A. aflatuense – hundreds of purple pompoms, floating above the hostas and bobbing among the ferns.

Alliums are usually regarded as sun-lovers, so this was a gamble. “I thought, if they get a bit of filtered sun, they might do, and they have done. In fact, they seem to last longer than they do in full sun,” Pearce says. While she does top them up every other year, they appear to thrive and increase.

More to the point, this is the only place at Lady Farm where Pearce can enjoy an onion. “My husband has a great aversion to all the allium family,” she says. “I haven’t had an onion or a clove of garlic in the kitchen since the day I was married.” It does, however, guarantee that he never comes anywhere near the hosta walk. And you couldn’t wish for a more magical place to be alone. 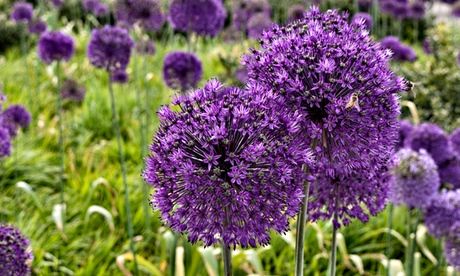 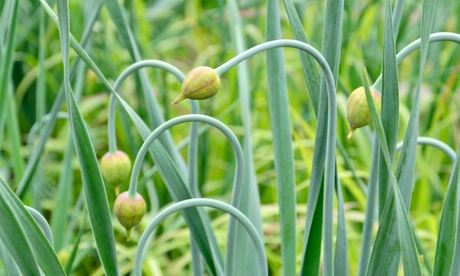 
• A. obliquum (60-75cm) bears furry golf-balls of primrose yellow. The blue-green stem kinks and twists, sometimes curling right around like a pig’s tail – a real eye-catcher at the front of a border. 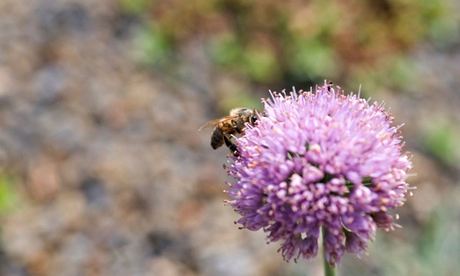 
• In most alliums, the foliage turns manky, making them unsuitable for solo plantings. The exception is A. senescens subsp. glaucum (25cm), which has whorls of grey-blue leaves that twist upwards into swirling corkscrew shapes. Place it in a gravel scree to enjoy the curious underwater effect. 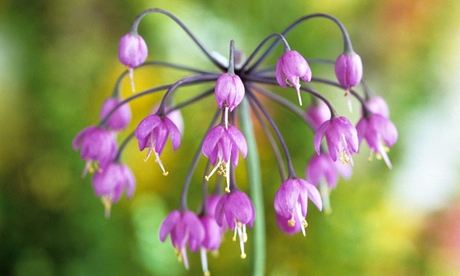 
• The nodding onion, A. cernuum (50cm), a staple food of native Americans and early European explorers, is a favourite with bees and butterflies. 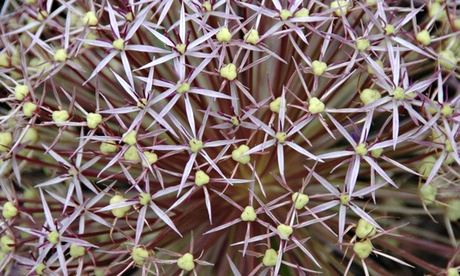 
• Take dried seedheads of A. cristophii, glue a sequin in the centre of each floret and hang it above a lamp; it will turn like a disco ball.