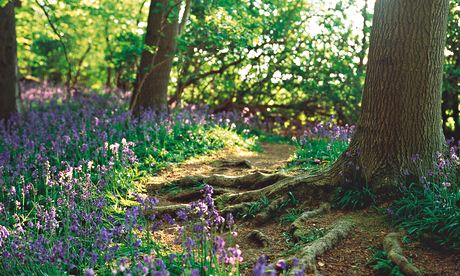 The Serengeti can keep its wildebeest migration, Mexico its monarch butterfly roosts and Sarawak its bat cave swoopings, for over the next few weeks we have our own natural phenomenon: bluebells. A single bluebell is a lovely thing, but it is en masse that they are most spectacular, forming a blue haze that floats just above the woodland floor. And it is en masse that we get them. Woodlands throughout the country are right now briefly turning cobalt blue.

If you want to grow your own, then settle in for a long wait. Woodland soil has been enriched over many years by the annual falling of leaves, but you can mimic this by digging buckets full of leaf mould into yours, then adding a generous mulch of the same each year. Bluebells thrive in deciduous woodland, emerging, flowering and dying back all before the full canopy of leaves has opened to shade them out, so make use of any similar niches in your garden, planting underneath deciduous shrubs and trees. It is normal for newly planted clumps not to flower for a few years, while they re-establish their root systems. Plant deep, with the bulbs at least four inches below the surface of the soil.

You must never dig up plants or bulbs from the wild and must always source them from a reputable nursery: it is a good idea to buy plants now, in bloom, so you can be sure you are buying the native bluebell Hyacinthoides non-scripta, rather than the coarser Spanish bluebell, Hyacinthoides hispanica. They do look quite different: Spanish bluebells have a more chunky and upright stem, and paler flowers that are more open and star-like than closed and bell-like; its leaves are also much broader and rounder.

The Spanish bluebell is difficult to eradicate once it has its feet under the table, and will slowly hybridise with any natives you plant – their offspring will lean more towards the overbearing Spanish than the delicate native. There is little harm growing the Spanish types in gardens that are far from bluebell woodlands, but if your garden is anywhere near a bluebell wood, you will do the woodland a great favour by doing your best to dig up any Spanish bluebells and dispose of them.

But for now it is time to go down to the woods and feast your eyes on all that blue. Most bluebell woods are just woods. If that isn’t fabulous enough for you, here are five of the best places to see bluebells that also have gardens or nurseries attached.

The nursery specialises in herbaceous perennials, and is surrounded by a 1.5-acre garden where you can see the perennials strutting their stuff. But beyond this is a wildflower meadow leading to the 1.5-acre bluebell wood, left natural but for a circular path that’s kept clear through the woods, meadow and back to the garden;

A roof garden may seem the least likely place to see bluebells, but Kensington Roof Gardens has an English woodland complete with mature oak trees. Both oaks and bluebells are at home here despite the garden boasting a soil depth of just 1.5m;

Myddelton House was home to the late EA Bowles, celebrated plantsman of the early-20th century, and his gardens are interesting and beautiful. Once you’ve had your fill of bluebells, pay homage with a stroll around the alpine meadow, stone garden, rock garden, carp pond and Victorian conservatory.

Coton Manor boasts a spectacular five-acre bluebell woodland fiercely patrolled for Spanish invaders. Beech trees dominate, providing the perfect pale lime-green canopy as the tips of the leaves emerge. The understorey is kept clear to provide the most far-reaching bluebell views possible. After your stroll, partake of blossoming orchards, wildflower meadow and a 10-acre garden packed with spring bulbs. There is also a nursery selling plants propagated at Coton from specimens grown in the garden.

Combine a bluebell walk with a richly botanical experience at Wakehurst Place, Kew’s “country garden”, where the bluebells nestle at the feet of trees from South America as well as the Mediterranean. Elsewhere, see the Himalayan Glade and several national plant collections, and visit the state-of-the-art seed bank.