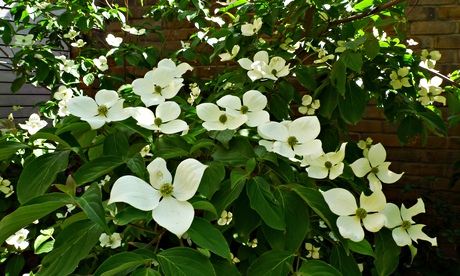 Cream of the crop: Cornus ‘Gloria Birkett’. Photograph: Huw Morgan for the Observer

At the far end of the studio garden, where the path narrows beyond the katsura, we have a little grove of Cornus “Gloria Birkett”. I planted three to form a shady canopy around a private table for two. You find this little resting place as you wend your way out of the light and into the dappled space underneath and despite the sirens and the London frenzy just over the wall, they help you in making an escape.

The garden is now in its fifth summer and the cornus have already broken free of the fences. You get the best of them looking down from inside the building, as their flowers sit horizontally above the branches in a tier. The actual flowers are an insignificant centre point of the main attraction, four perfectly drawn bracts which taper at both ends like a beamy canoe. They are exquisite in their simplicity and matt creaminess and they manage to capture both reserve and opulence.

Summer flowering trees are less usual than the blossom trees of spring, but flower to raise the eye is welcome when the canopy is in leaf. The cornus come into their own in the rushing ascent to the longest day when they are flowering with elder. Sambucus are a good compliment for their delicious summery perfume which the cornus lack. Sambucus nigra “Laciniata” follows through well after both have dimmed, the elder producing inky black berries and the cornus a weight of strawberry-like fruit which last well into the autumn. I haven’t tried them, but they’re edible.

“Gloria Birkett” is a selection of “Norman Hadden” which is freely available and as far as I can see identical. My own trees are already developing the characteristic outstretched limbs. They promise to get to a height of about 10m in time. Mine have been quick to offer the luxury of walking under the shade of a tree I planted myself.

Cornus kousa and Cornus florida look wonderful in deciduous woodland in the United States, but never do as well here without the summer heat to ripen the wood. Specialist nurseries offer a bewildering number of hybrids. Once I was missupplied with the enormous “Eddie’s White Wonder”, which is bigger in all its parts than “Norman Hadden” though not any better for it. I have used pink flowered forms in Japan, where the sugariness sits better with a Hello Kitty sensibility, but I wouldn’t use them here. Stick with the simplicity of cream and you won’t go far wrong.

If you have acid soil or are prepared to grow them in pots, the perennial Cornus canadensis is a delightful groundcover. Running gently through damp leafy soil and in the dappling of shade, it will feather itself among epimediums and trillium where the flowers will light the floor. It is a delight to come upon them at your feet, the flowers identical to only smaller than their tree cousins and sparkling brightly as if they were winking at you from the shadows.

A neutral soil can be tipped towards acid with a mulch of bracken or pine needles, but an alkaline soil will always favour the plants that are adapted to it…