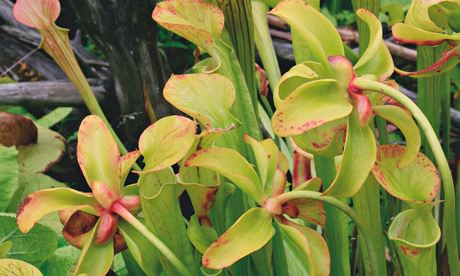 In a corridor at RHS Wisley, away from the cascades of orchids belonging to the Orchid Society spring show, members of the Carnivorous Plant Society watch over tables of monstrously diverse life forms known as CP. Here, the Liberty print of the orchid set is replaced by the cobra lily (Darlingtonia californica), the CPS logo.

CP are remarkable for their variety: the Laura Ashley glamour of the pitcher plant (sarracenia) in flower is fast replaced by the psychedelic trumpets of its pitchers; the butterwort Pinguicula gypsicola is part-monster, part-primrose with a flower that looks like a rabbit’s face. Some, like the yellow pitcher plant S. flava, come up smelling of roses, while the open-mouthed gape of Low’s pitcher plant (Nepenthes lowii) resembles a toilet seat – in fact, the tree shrews of Borneo use it as one. In the UK, pitchers can grow to more than 4ft tall, while the microscopic flower of the tiny sundew Drosera pygmaea projects an alien world in miniature.

Contrary to what one may expect from an insectivore, CP smell pleasant and faintly of honey. Insects come willingly in their droves, attracted by sweet nectar. CP trap and kill their prey in different ways: the Venus flytrap (Dionaea muscipula) sports shark-toothed sensors on hinged leaves that snap shut, trapping insects inside. Sundew use beads of treacly glue to trap flies on their finger-like leaves. The bladderwort (utricularia), incognito like a snapdragon, has an ingenious underground lair, vacuum-sucking insects to chambers where they are acidified; pitchers are outwardly passive, but inside their cavernous depths float a mass of drowned flies.

For CP collectors, owning a windowsill fly-killer is often the starting point. CPS chairman Tim Bailey started at the age of seven, with a Venus flytrap. He now has a serious collection including two sarracenia of his own creation (S. ‘Sweet William’ and S. ‘Eloise’, named after his son and daughter).

The Victorians collected CP for their strange beauty and to keep flies off botanical treasures in the orchid houses, but many CP live unnoticed in our turfy bogs and forests. In the New Forest look underfoot for sundews, butterworts and even the odd Venus flytrap. But if you want to try growing CP in your own garden, sarracenias are the place to start.

“The North American pitcher grows well in the UK and is a great starter plant,” says Matthew Soper, whose quarter-acre greenhouse at Hampshire Carnivorous Plants houses thousands of CP varieties. Soper created S. ‘Johnny Marr’, after the Smiths guitarist. S. ‘Matt Johnson’ (of The The) with its bright yellow flared pitcher and cowboy hat hood (a theme park for landing flies) will debut at the Chelsea Flower Show this month.

“Think of them as extraordinary weeds,” says Soper of his prize-winning sarracenia. CP like to get their nutrients from flies, so don’t feed them hamburger. They hate tap water, but need a boggy environment; in summer, sit plants in a tray with rainwater half an inch up their plastic pots. Reduce as winter approaches or rhizomes may rot. CP grow best in three parts sphagnum moss peat to one part perlite, although the CPS is trialling peat-free mixes using coir. Pitchers like sunlight throughout the year; insufficient light is a major cause of death. For best results, grow on a sunny windowsill or in a cool glasshouse, but most sarracenia are hardy enough to grow outdoors.

Five of the best

S. purpurea: known as the huntsman’s cup, this low-growing species has red flowers.

S. flava var rubricorpora: external surface is red-purple and its lid is green with red venation.

Visit thecps.org.uk for detailed growing guides for sarracenias and other carnivorous plants.