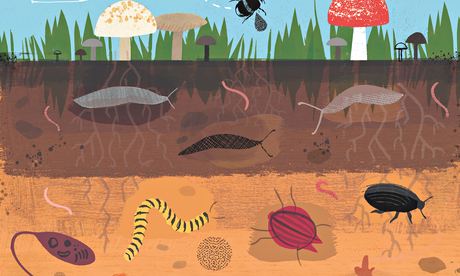 The Worldometers website is compulsive viewing. If you watch this “real time world statistics” site ticking, you will see the world’s soil disappearing before your eyes. The statistic for land lost to soil erosion ticks over slower than some (the one measuring world population, say, or the number of cigarettes smoked), but it’s growing a few hectares a minute.

And it’s not only in impoverished regions of the world; the UK’s soil is in peril too. Erosion, compaction, pollution, development and loss of organic matter are damaging something that’s as vital to life as water and air. It can take up to 500 years to form 1cm of soil, and Defra says soil degradation costs England and Wales between £0.9bn and £1.4bn every year.

Soils vary wildly, from chalk to clay, acid to alkaline; there are more than 1,800 different types in the UK alone. After the deluge this winter, many rivers ran brown as soil washed out to sea. Exposed, damaged soil is vulnerable to being washed away by high rainfall, while reduced organic matter and compaction caused by over-cultivation or over-grazing make it less absorbent. Where water once soaked in, it now runs off, exacerbating flooding and causing further erosion.

Patrick Holden, a British farmer who once ran the Soil Association and now heads up the Sustainable Food Trust, warns that the floods have seen a “catastrophic leaching of goodness from the soil”. He says soil is at the fulcrum of the debate about sustainability: “It is the irreplaceable resource on which the future of civilisation depends. We should be seriously worried. Soils are haemorrhaging across the world.”

Why should we care? Because, as Professor Jane Rickson from the National Soil Resources Institute says, “Soil is amazing, providing us with food, fuel and fodder, storing water and carbon, and supporting habitats and infrastructure. It’s like an engine made up of physical, chemical and biological components. It is their interaction that makes it work.”

Soil may seem simple, benign stuff, but it teems with life. A teaspoon of rich garden soil contains up to a billion bacteria, within a complex and shifting mixture of grains, pores, channels and chambers. The microbes store, transform and release nutrients that plants need: nitrogen for growing leaves, phosphorus for roots and potassium for flowers and fruit.

Soil is also connected to climate. Healthy soil stores and slowly releases water in periods of drought or flood. It’s also a carbon sink – there’s more carbon stored in the soil than in vegetation or the atmosphere. When soil is blown away by wind and rain, it releases carbon into the atmosphere.

The threats soil faces may be great, but there is still hope. Holden says gardeners need to act as “soil stewards” alongside farmers, and encourages us to see soil as a sort of stomach, digesting the food that plants need. That stomach, packed with friendly bacteria, should be fed well and treated with care.

• Keep off saturated ground – it needs time to drain and dry.

• Start mulching – it’s the simplest and easiest way to protect and improve soil.

• Compost all you can, so you can feed soil with rich organic matter.

• Say no to polluting chemical fertilisers and pesticides.

Who’s who in the soil food web:

Tiny strands of mycorrhizal fungi live in symbiosis with plant roots, helping them to extract nutrients from soil.

Nematodes are a group of microscopic, wormlike organisms that eat bacteria, fungi, algae and other organisms.

Bacteria are microorganisms that help to break down organic matter. Some help to fix nitrogen, too.

Mites, centipedes, spiders, beetles, springtails and woodlice are all arthropods: invertebrates that eat fungi, bacteria, plant particles and each other, producing nutrients for plants and aerating the soil.