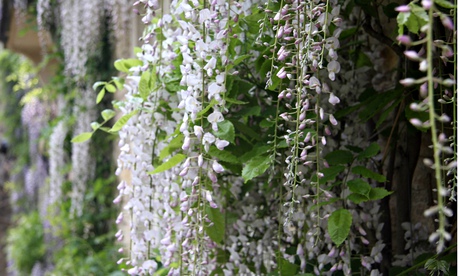 Wisteria will benefit from a careful prune before it buds to stimulate spur growth. Photograph: Alamy

I have just been out into the wet to look over the pruning in the studio garden. The spring-flowering clematis already have their buds visible, reminding me that I need to make way for a blackbird that has returned each year to nest in the evergreen jasmine. Once she is here, busily nest-building, the wall of climbers becomes a no-go zone, so it is time to act first.

Winter pruning has several functions. It is necessary to avoid that gentle creep upwards which leaves climbers tangled at the top of the wall with bare ankles where we need the green. Each plant has its own requirements, but the opportunity to organise and set them off in the right direction for the year ahead is one I savour.

I like to take it slow, for it is a good investment in how the garden looks as well as its wellbeing in the seasons to come. Getting up close with your plants allows you the intimacy of seeing what is really going on. It is then you will see the wisteria scale if you have it; paint it with methylated spirits to keep it in check.

It is also the chance to train your climbers, to head them off at the pass if they are looking wayward. Climbers are invariably spirited, because they were designed to reach into the light, to do their flowering and fruiting in the sun where the birds and bees can get to them. We, down at human level, want more than a twist of stems and the craning of necks to see the best of the plant.

I started with summer-flowering clematis, taking them back hard to 18in to promote a good spread of flower. Next is the wisteria, before it comes into bud. Ours is a layering taken from a garden I used to manage in southern Italy where the parent festooned the ruins of an old castle. It is a fine form of the Japanese Wisteria floribunda with super long racemes of pale just-pink flowers tinged with violet in the bud. Its perfume in Italy was unforgettable, but before I experience such joys I have to set up my four-year-old so it performs in the restriction of our London garden.

Wisteria are famously shy in their youth and will not flower until they are ready and settled into their position. Sometimes this can be a couple of years but more usually it is five or six. You need to exercise discipline to encourage it to flower sooner. To date I have trained a set of limbs, reducing the previous year’s growth by at least a third every year to encourage spur growth, which is where the flower will be. Once the plant is as far-reaching as I need it to be I will resume reducing the summer growth to six leaves in August, and to two buds in winter.

Although they do not demand such rigour, deciduous jasmine and honeysuckle should be treated in much the same way to encourage them from racing to the tops of their support and twisting into a tangle. Stand back and look before acting and savour every cut. Before long you will be reaping the benefits.

Never prune spring-flowering clematis in the winter as they flower on last year’s wood. Wait until they have flowered so they have the summer to establish more flowering wood before next year.