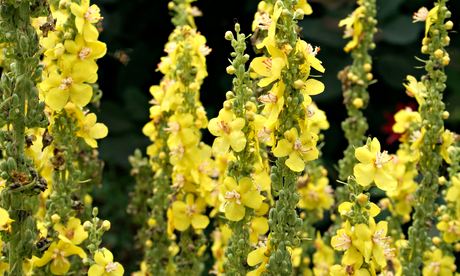 I’ve tried to grow about 50 kinds of verbascum. Most have died. The word on the horticultural street is that many – like Verbascum ‘Helen Johnson’ and V. ‘Jackie’ – die in the bag on the way home, despite the protestations of the seller about their perennial qualities. I was a judge on an RHS verbascum trial and only four out of 84 got an award of garden merit (AGM). Yet I like verbascums and have thriving populations established over the stockbeds of my nursery. You simply have to know which ones to acquire.

The easiest are the self-seeding annual/biennials. Although they’re described as biennials, I reckon they’re hardy annuals because they come up in the autumn, overwinter, bloom then seed and die. The most well-established is V. olympicum. In June the flowers are packed into long heads which can tower to 3m. Flowers open randomly up and down the spike-like inflorescence and carry on for a long time. It would be unusual not to have a few flowers as late as November. What remains are immense brown triffids that I leave for winter effects. In high winds these whip around but remain rooted in the soil, scattering their seed.

The other well-established annual is V. creticum. This is a greener plant (V. olympicum has grey foliage) and rarely tops 1.5m. The flowers are not as densely packed as in V. olympicum but they can be up to 6cm wide and in the centre of each is what appears to be a bumble bee. V. creticum finishes flowering in August or September, and the dead heads do not make such a good feature.

Self-seeders can be a nuisance, but neither of these verbascums are a problem for me. The only ones I remove are those that would impede movement along a path. Some arrive at the front of beds but I leave them because having tall or very tall plants forward in a border is fine when it is easy to see beyond them.

The third self-seeding annual established on the nursery is V. phoeniceum. It barely self-seeds in my cold clay, but the flowers are a ravishing deep purple and held in classy loose heads.

Heavy clay soil in an exposed garden can be inimical to plants from the Mediterranean and Turkey, but one cultivar thrives. At the end of the RHS trial, a verbascum submitted by the gardens at Great Dixter had been judged to merit an AGM, but it had no name and it wasn’t available to buy. In order to get its award, a couple of nurserymen were given it to propagate and sell, and Dixter’s Fergus Garrett named it Christo’s Yellow Lightning.

Although the plant is a hybrid spotted at Great Dixter, the name originated in eastern Turkey. Garrett tells how he and Christopher Lloyd were sitting near Lake Van surrounded by small fritillaries and noisy turtles when they spotted a boy with an old white donkey loaded high with dead verbascum stalks for fuel. Garrett called the boy over and asked him what his donkey was named and he said White Lightning, which tickled Lloyd. From then on, whenever Garrett and Lloyd talked about verbascums, the conversation ended up with White Lightning the donkey. So Garrett named the verbascum after Lloyd’s death because he wanted to remember their times together and especially that moment in Van.

It’s a good plant but shortlived and best replaced after two to four years. The cool yellow flowers are held in immense, broad multibranched heads. Buy replacements or take root cuttings. Choose young vigorous clumps to propagate or remove the roots from the plant you’ve bought before planting it. Do this from autumn until late winter, washing the roots so you can see what you are doing. Choose young, vigorous pencil-thick roots and cut them off close to the crown. Take no more than a third off the roots and replant the crown. Trim away thinner roots and cut into 3-4cm lengths. Plant in gritty compost with the top of the root just below the surface. Put them outside, pushed close to a wall and wait.

My daughter-in-law, Beth, says verbascums are antisocial. I think what she means is that they like their own space and a bit of elbow-room. They also dislike acid soils. The deadheads of V. blattaria, I am told, are fabulous at Christmas when spray-painted gold or silver. What an incentive to grow them.