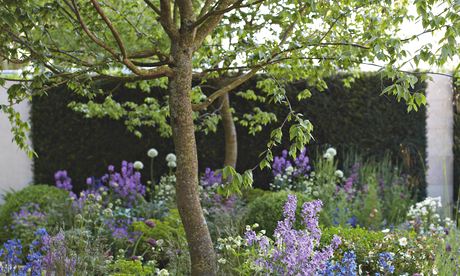 2 Bring back the birch

The naturalistic planting style of the past decade or so continues to dominate, but the look is softer in 2014, with the sinuous trunks of multi-stemmed trees – birches, acers and amelanchiers – emerging from a mist of delicate blooms below. I particularly liked the peeling bark of Charlotte Rowe’s river birches (Betula nigra), and the effect Giubbilei has created with balls of hornbeam. The other tree trend is pines, from the pitch pine (Pinus rigida) in Catherine MacDonald and Susannah Hunter’s Massachusetts garden to first-timers Auderset Fischer’s twist on the box ball using Pinus mugo ‘Mops’. Happily, both of these looks are far easier to create than high-maintenance box topiary. 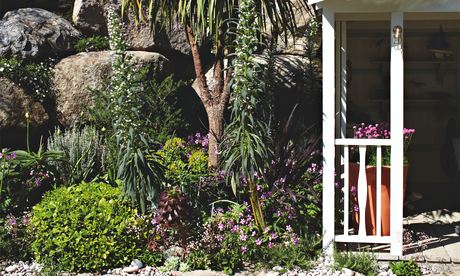 
Given his unceremonious dumping from his role as presenter of BBC coverage after three decades, Alan Titchmarsh has provided a clever riposte to those who sidelined him by creating a garden that garnered perhaps more mainstream media attention than any other. He and up-and-coming designer Kate Gould have created a garden celebrating 50 years of Britain in Bloom and reflecting the landscapes of his own life – his birthplace in West Yorkshire, and the Isle of Wight, where he and his family have a flat. This garden was notable for the absence of the usual Chelsea tropes, instead relying on untrendy yet crowd-pleasing elements, such as a water feature formed of huge boulders and a sandy beach planted with tender plants.

If you’ve been disheartened by the mismatch between the images of perfection you’ve seen at Chelsea and your patchy lawn and blackspot-ridden roses, remember – show gardens bear little resemblance to real gardens. They are ephemeral things: plants are packed in and often left in their pots so they can be yanked out at the end of the show. The big show gardens have budgets of £250,000 and up, and feature mature trees and huge sculptures. Nurseries supplying plants have acres of climate-controlled glasshouses and polytunnels; you have a creaky plastic greenhouse that nearly blew away in the winter’s storms. If you feel inspired by Chelsea, plant a few more spring bulbs this autumn, plant a small tree and clothe the boundaries with climbers. Next year your garden will look better, if not quite a Chelsea masterpiece.

Plants that would be the target of a bottle of Roundup in our own gardens are popping up all over the place at this year’s show. It’s partly the latest conclusion of the naturalistic planting movement, partly a nod to making gardens appeal to wildlife.

Many of the gardens are linked with emotive stories. Matthew Keightley’s Help for Heroes garden was inspired by his brother’s experiences in Afghanistan; Rowe’s No Man’s Land garden, for ABF the Soldiers’ Charity, represents the scarred landscape of first world war battlefields. West’s garden draws on the archetype of the paradise garden invented by the Persians as a place of sanctuary.

If you really want to learn about plants, forget the show gardens: the pavilion is where the serious plant people hang out. I went weak-kneed over the tree peony ‘Renkaku’ – huge, dinner-plate blooms of tissue-paper whiteness so exquisite they looked unreal. And Hillier Nurseries’ white garden display is pure fantasy for most of us who have dreamed of taking a little bit of Vita Sackville-West’s Sissinghurst home with us. 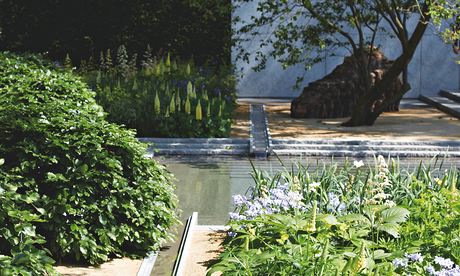 
This is the year Chelsea didn’t just embrace social media, but jumped into its arms. Every garden designer has been tweeting, updating Facebook and Tumblr, and snapping shots for Instagram and the odd #chelseaselfie. Check out #RHSChelsea to find out what people really think of the gardens.

Women are still sadly under-represented at the show: the profession is full of females, yet there’s nowhere near a 50-50 split at the top. There are signs of hope, however: Sophie Walker, 28, is the youngest female designer to appear. Her Cave Pavilion garden is truly innovative and exciting: it’s a Perspex lightbox, a reworking of the idea of the Wardian case, a glass box used to transport rare plants. The plants all come from the collection of present-day plant hunters Sue and Bleddyn Wynn-Jones.

The Chelsea Fringe festival, now three years old, has bedded in nicely. While Chelsea on press day is full of women being paid to wear silly outfits (or not very much at all) to catch the eye of a gaggle of press photographers, the fringe feels like not so much a sideshow as the place where the action is really happening. Expect the next big thing in gardening to come from here. There are events all over London and beyond until 8 June.