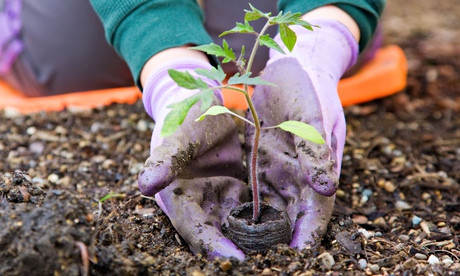 The therapeutic benefits of gardening have been recognised by charities such as Freedom from Torture, which use it to help rehabilitate victims. Photograph: Alexey Stiop/Alamy

This is the season of abundance, when the garden is at its fullest. Flowers are in bloom and the grass is pushing through so fast that half an hour after mowing it you seem to be back where you started.

This year, for the first time, I am attempting to grow my own veg. An attempt that has so far proved wildly successful, which is to say that the beds have gone wild with an almost indecent profusion of lettuce and kale and spinach and some red leafed thing – I can’t now remember what it was, nor whether you’re meant to cook it.

I am a total horticultural novice but you cannot plant so much as a plug of curly leaved parsley without feeling a connection not only to the earth but to the countless generations who have worked the land before you. To plant and to tend and to harvest what you grow is to feel an elemental sense of belonging that is deeply therapeutic.

My friend and gardening mentor agrees. Originally from Malaysia, Tash has lived in the UK for more than 25 years since he first arrived, aged 16. His ancestors were also immigrants, travelling from the rice fields of south-eastern China to settle in what was then Malaya. “It’s quite literally about putting down roots,” he tells me. “It’s no coincidence that so many people who have allotments in London originally come from somewhere else, from Turkey for example, or Bangladesh.”

The charity Freedom From Torture (formerly the Medical Foundation for the Care of the Victims of Torture) has been using gardening as a form of therapy and rehabilitation for more than 20 years. Mary Raphaely, co ordinator of its Natural Growth Project says that clients can find “an initial spark of hope” in nature.

A project client, Suleyman, agrees, “To begin with I tried antidepressants. But nothing seemed to keep the memories away. Everything was darkness – and I hated the city, where I felt confined and unable to speak or do anything. Then I came here and everything seemed familiar. I am always at one with the earth. If the garden looks good, I feel good. When the soil sleeps, I sleep. Apart from these things you have, these snails and slugs which were new to me, there is no evil in the garden”.

The mental health charity Mind is also attempting to harness the therapeutic power of nature with its EcoMinds programme. Between 2009 and 2013, EcoMinds funded 130 projects across England with activities including gardening, food growing and environmental conservation. Over 12,000 people participated and more than seven out of 10 reported a “significant increase” in mental wellbeing. Last October, it launched Ecotherapy Works, a national campaign targeting health and wellbeing boards with evidence of the effectiveness of ecotherapy.

I think such schemes have tremendous potential for improving the mental and physical wellbeing of participants. When I think of the 18 months I spent sitting in the common room of an inner-city day hospital, with a dead plant in the corner, smoking and drinking tea; and imagine instead spending them outside, not shut off from the world but an active part of it, feeling the rhythms of the earth, at one with the seasons, hands covered in soil, it does seem to me a more promising environment in which to seek to recover. An environment that can wordlessly offer activity, community, a sense of purpose, hope.

Because if gardening links us into the past, to those who have dug the earth before, inevitably it points to the future too. Again and again, in that simple act of planting, I express my belief in the promise of tomorrow.