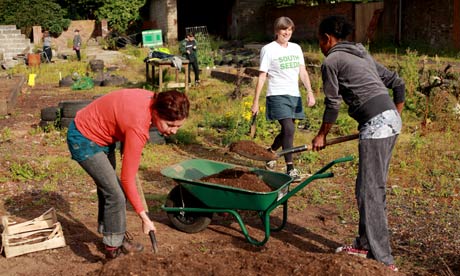 Residents of one of Glasgow‘s poorest areas have reacted with shock after bulldozers destroyed a popular community green space.

The Agnew Lane Garden, in the city’s Govanhill area, was built and maintained over three years by around 200 locals with help from environmental charity South Seeds.

A former industrial unit, the site had languished in disrepair until volunteers cleared rubbish, installed raised beds and began growing fruit and vegetables.


But on Friday workmen acting for the site’s owner – Hunter Homes LLP – tore up the garden without warning.

The landowner, a property development firm one of whose directors is listed as residing in Monaco, has applied for planning permission to build flats on the site.

Local resident Esther O’Connor said the garden had had a marked effect on the local community:

The Agnew Lane garden was a beacon of hope in Govanhill. It was a life-giving project that brought neighbours together.

My husband and I have lived here for 10 years, and through the garden we’ve built relationships with people that we otherwise wouldn’t have been likely to engage with.

The mindless destruction in two hours of something that took three years to nurture and build is heart-breaking.


In a statement on its web site, South Seeds said that while it acknowledged that the land was not owned by the community, the sudden and unannounced demolition of the garden meant that they had been unable to salvage the majority of the plants and materials from the site.

Agnew Lane Community Garden was one of the very first projects undertaken by South Seeds, back when we were a small community organisation, with no funding and very few resources.

From the very beginning, we were aware that the site was owned by a developer and that planning permission was in place; however the land had lain vacant for many years and was a target for fly-tipping, drug abuse and other anti-social behaviour.

At this early stage, we made repeated attempts to contact the landowners; we wrote emails, left telephone messages with their receptionist/assistant and sent recorded letters, asking for permission to use the site on a temporary basis. No response was ever received…

[We] must reluctantly accept that the landowners were within their rights to reclaim the space. We were still shocked and disappointed that no attempts were made to engage with us, and that the site was destroyed without notice and without consultation.

We are particularly upset as we had also been in talks with another local landowner with regard to signing an agreement to use another space very near to the Agnew Lane site, which could have provided a great home for the raised beds, plants and trees that our volunteers have worked so hard to cultivate.

A spokesperson added that the charity hoped to have a new location ready for the start of the growing season in 2014.

The company’s official headquarters are an address in the west end of Glasgow; it made no response to the Guardian’s requests for a comment.