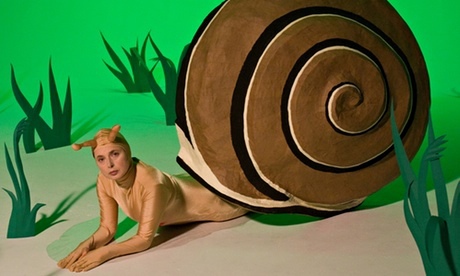 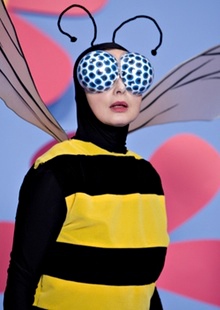 Ranging through the sex lives of snails and spiders, to ducks, dolphins and even barnacles, this is the sort of lecture that dreams are made of. It’s surreal, dirty and meandering. Rossellini delivers what she calls her “conference” with wit and without inhibition, and accompanied by some utterly bonkers and brilliant films. She is both worldly wise and wide-eyed with wonder about her subject. Biodiversity needs champions like this.

Rossellini begins by discussing flowers and the fact us humans proudly give and display bouquets of sex organs. “I’ve seen them in churches” she gasps, with mock disgust. She goes on to describe and illustrate all kinds of copulation in vivid detail, explaining she best understands something if she can get inside the skin of it. As an actress, she must become the praying mantis that is beheaded by his lover or the female spider who is eaten by her offspring. To do this, she sports some fantastical outfits and stars alongside paper puppets in a series of short films.

In one of these films, we see her dressed up as a snail, complete with enormous slimy foot, stuffed inside a shell with her head and anus in dangerously close proximity. She demonstrates that snails are sadomasochists, shooting ‘darts’ at potential mates to turn them on. Later, on stage, she explains how dragonflies have sex, using a pair of winged rubber gloves and a toothbrush as props. The brush is for wiping away anything previous romantic visitors might have left behind. We learn that, relatively speaking, the barnacle boasts the longest penis in the natural world, and that female ducks have labyrinthine vaginas. And that dolphins have exotic uses for their fins and blowholes.