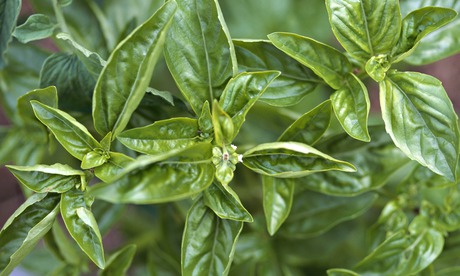 Basil must be sown from seed every year or two. Photograph: Ron Morsch/ Roy Morsch/CORBIS

Do you cook with fresh herbs? Then sorry. Since this column started, you’ve probably spent a tenner or more on sachets of tired and wilting tarragon or chives. You could have put that money towards a regular supply of genuinely fresh aromatics.

The good news is that with many popular herbs you can be up and running in just hours. While basil, parsley, coriander and dill must be sown from seed every year or two, or bought time and again as immature specimens, perennials like rosemary, thyme, chives, sage, mint, bay, oregano and tarragon should last at least three or four years. Some, like rosemary, can live 30 years or more.

This is one of those rare times when the lazy, spendthrift way of doing things really is best: you need to go to the garden centre at the earliest opportunity and buy plants that are big enough to harvest immediately. If you get smaller specimens, you’ll just have to keep going to the shops while they establish themselves. Aim for well-filled 22-30cm pots, or similar.

Back home, you should either move the plants into sturdy, attractive containers, as you’ll be living with them for a long time, or stick them in the ground, in both cases choosing a sunny, sheltered location and well-drained soil. Unless the soil is extremely poor, don’t worry too much about enriching it: most herbs have a better flavour if they’re not mollycoddled. For the same reason, don’t overwater them. Chives and mint like moisture, but other perennials are happier on the dry side. This is something to bear in mind if you are planning on planting several species in the same container or corner of the garden – as is the fact that mint is so invasive it should be kept well away from everything else, ideally in its own pot. If your area is prone to severe frosts, keep rosemary, sage and bay in containers that can easily be moved somewhere sheltered in winter.

Try not to harvest more than about 10% of leaves at any one time, although you can be more brutal with mint, and chives will benefit from being cut right back to the ground two or three times a year.