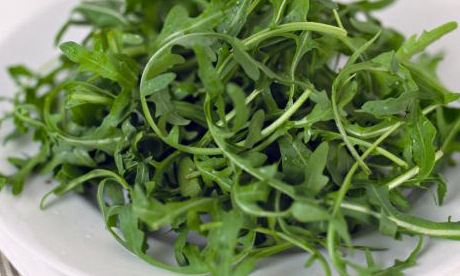 Rocket – not only easy on the palate and waistline, but easy to grow as well. Photograph: Anthony Blake

Long, long ago (Britain still had miners!) I spent the best part of a year working at a posh greengrocers in the home counties. When the local ladies went shopping on a Saturday – their husbands were all on the golf course or chasing their au pairs round the laundry room – the queues for fruit and veg stretched far down the street. The Housewives of Gerrards Cross loved their dinner parties, and they all wanted mushrooms to stuff for their starters, or icebergs for their prawn salads. My boss, who had a Porsche and a lovely young wife, worked 16 hours a day to meet demand.

I’ll get to the point. Never, in all that time, did I once encounter rocket. This peppery, chewy half-herb, sort-of-salad was popular in Elizabethan days, but fell from favour in the centuries that followed. I don’t know when it became fashionable again, but my guess would be the late 80s. And then most of us called it rucola or arugula, and thought of it as an exotic import.

And yet rocket is simple to cultivate and quite at home in Britain. Sure, it bolts (flowers prematurely) and runs to seed in hot weather – but even then, both the flowers and seeds are edible. As for pests, flea beatles may make holes in the leaves, but these are purely cosmetic. If you expect your veg to look as perfect as it tastes, you shouldn’t be growing it anyway.

You can sow rocket seeds from March to September in the open, and after that under cover. Partial shade is fine, as it will provide some protection from bolting, so this is the perfect crop to fill the space between taller plants. Scatter seeds lightly over well-prepared soil every two or three weeks, water regularly (especially in hot weather) and the first leaves should be ready within a month. When they are about 8-10cm long, you can either cut entire plants (they will resprout) or start harvesting a leaf here and a leaf there. Either way, remove any flower stalks that appear. Once a whole sowing is clearly determined to set seed or the leaves grow too big or peppery, either pull the plants up and start again – or just leave them to self-seed and do the job for you.