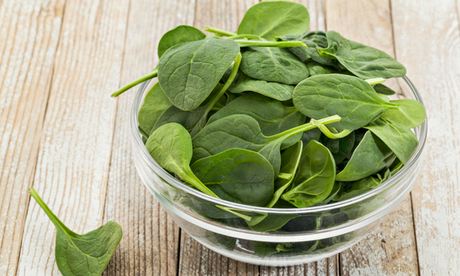 I grew up believing that spinach was a slimy, tasteless abomination that came into the world in tins, like soup or ravioli. For the first misconception, I blame school dinners; for the second, Popeye the Sailor Man, who could open a can with one clench of his muscles. “I’m strong to the finish, ’cause I eats me spinach,” and all that.

But that was hundreds of years ago. Most modern kids only know spinach in its washed and plastic-wrapped form. Bring it into the kitchen straight from the garden, leaves speckled with earth and the odd snail, and you’ll help them to make the connection between what they eat and messy, muddy nature.

That’s the theory, spoiled only by the fact that they’ll refuse to touch it. Still, that leaves more for the rest of us.

For nine months of spinach or more (even a whole year, with a sheltered site and a mild winter) you’ll need to sow seeds into well-composted and fertilised soil every three or four weeks from early spring to early autumn, avoiding cucumbers, which can transmit a disease called blight, and protecting the plants with cloches or fleece in the depths of winter, when growth will slow before the spring bounce-back. You’ll need two varieties: “long day” for spring and summer crops and “short day” for autumn and winter. As always, it pays to read the seed packet.

The seeds you sow in late April should give you the first baby leaves by the start of June and larger plants two to four weeks later. For single plants, sow the seeds thinly in drills – rows – 30cm apart. Thin seedlings to one plant every 15cm. For cut-and-come-again leaves, sow thinly in drills that are 10cm apart. They shouldn’t need much care afterwards, apart from regular watering. Keeping the soil moistwill offer some protection against “bolting” – premature flowering and a slump in leaf growth. This is the spinach-grower’s bane, so buy bolt-resistant varieties if you can.

Otherwise, in spring, you can combine sowings of spinach with Swiss chard, which is less of a prima donna. Pick it young, and you can treat it like spinach; allow it to mature and you’ll want to slice out the thick stem, which you can steam, stir-fry or use in gratins.