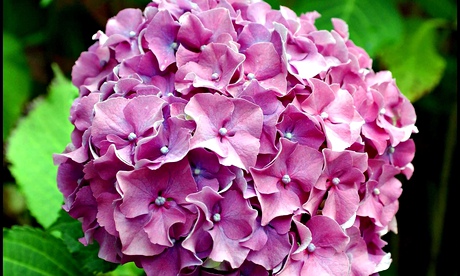 A pink hydrangea flower or an evil cheap drug much sought after in northern France? Photograph: Lisa Carpenter for the Guardian

Some gardeners prefer the spiky hydrangea paniculata; some others opt for the smoother mop-head varieties like hydrangea macrophylia. Others, often those with yellow as opposed to green fingers, do not much care. They just like to rip of the flower petals of any old hydrangea – also known as hortensia – and smoke them, police in France have claimed.

Gendarme in northern France are on the trail of the “Hortensia Gang” acting on reports that dozens of the wintering plants have been stolen or severely pruned in the last few weeks.

Initially sceptical that youngsters were roaming private and public gardens chopping off hydrangea heads and leaves to dry, mix with tobacco, and smoke as a cheap alternative to cannabis, police say they are now investigating.

As part of their inquiries, officers spoke to local pharmacists who confirmed the hallucinogenic and euphoria-inducing effects of the hydrangea bloom, of which there are thousands of different varieties. Experts say the effect is similar to that of Tetrahydrocannabinol (THC) found in the cannabis plant.

According to the local newspaper La Voix du Nord, police are looking into around 20 complaints from local gardeners as well as town halls and village mayors about disappearing flowers over the last few weeks.

“With the crisis we have the impression people are now turning towards natural products, because synthetic ones are more expensive. If these thefts are linked to drug use, then its the same sort of wave as the hallucinogenic mushrooms collected in the wild,” Evrard told Le Figaro.

The French authorities believe the hortensia habit has been imported from Germany. Bavarian public gardens are regularly pilfered for their hydrangea flowers.

Before anyone rushes out to the nearest garden centre, cheap and widely available they may be but hydrangea-smokers risk poisoning themselves, said Kurt Hostettmann, honorary professor of pharmacology at the University of Lausanne and Geneva in Switzerland .

“The secondary effects of it are very bad for the health,” Hostettmann told Le Matin newspaper last year.

He warned the flowers can provoke stomach and respiratory problems, speed up the heart, cause dizzy spells and if consumed in large quantities can produce “hydrogen cyanide” (also known as prussic acid) the base of Zyklon B, the poison gas used in the Nazi death chambers causing a slow and painful death.

As the Royal Horticultural Society points out: “Hydrangeas may occasionally be affected by pests such as scale insects, hydrangea scale, capsid bugs, aphids and vine weevil”. It can now add French fumeurs to the list.