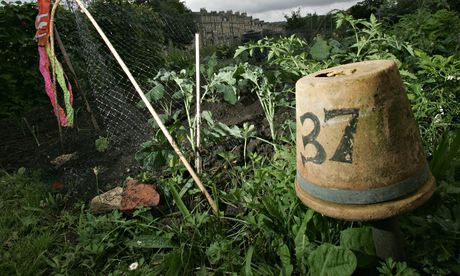 ‘Growing vegetables provides not carefree ­communion with nature but a ­struggle with an unco-operative Gaia.’ Photograph: Matt Cardy/Getty Images

Not so long ago the idea that allotments would be the subject of a primetime TV series would have seemed as preposterous as live pigeon-racing displacing Match of the Day. But the arrival of the BBC’s The Big Allotment Challenge shows that grow-your-own is a pursuit worthy of the same attention as baking, dating and home improvement. Around the country, waiting lists for plots are longer than for some private schools.

As an allotment holder myself, albeit very much the head gardener’s lackey, I’m ambivalent about this. Allotments are wonderful things but the rise, fall, and rise again in their popularity tells a story about social change that is both encouraging and dispiriting.

The Allotments Act of 1832 was designed for the “welfare and happiness of the poor”, with the land it provided used primarily as a source of turf and wood, cut for fuel. Over time food became a more important crop but, as living standards rose, people saw less need to toil away on hit-and-miss crops. More and more people abandoned their plots, which became largely the preserve of the ageing working class.

It wasn’t rising food prices that turned the tide. Waiting lists were already lengthening before the financial crisis. More fundamental was the rise of post-materialist values. In the hollow aftermath of materialism’s apogee – or perhaps nadir – in the 1980s, people increasingly sought satisfaction beyond mere things and looked to experiences instead. At the same time, we became more aware of where processed food came from and sought more authentic and organic meals instead. Allotments, now shorn of their association with poverty, provided a site where all these interests came together, providing a discrete, manageable contact with nature.

However, late capitalism has proved very adept at following consumers as they move away from straightforward acquisition. Assumptions and ways of thinking that have been shaped by markets and the media are hard to shake off.

You can see signs of this in The Big Allotment Challenge. It turns the allotment into a site of competition, when in essence they are all about solidarity and co-operation: sharing surplus crops, water troughs, tools and piles of manure. It also turns food cultivation into a kind of social display, reflecting allotments’ transformation from symbols of low status to status symbols. They have become an important element in creating a certain identity as a grounded, Earth-loving soul. And in the modern world, whatever identity we seek, people find ways of selling it to us.

This has become a familiar pattern. Meditation retreats, for instance, typically used to involve sleeping in a basic dorm and paying your instructor a modest, often voluntary, fee. Now they are increasingly taking place in expensive spa resorts. Time-poor urbanites are paying hundreds of pounds to forage or learn how to make bread. Time and again, fashion, media and commerce conspire to take what is good, turn it into a consumer product and in the process squeeze the value out of it.

But perhaps this is a stage beyond this. Because allotments are hard work, those who are attracted to them for the wrong reasons don’t last long. Growing vegetables provides not carefree communion with nature but a struggle with an unco-operative Gaia. Those who stick with it know the real rewards. The satisfaction of eating your own produce is not that it’s better than other people’s, just that you grew it. If you find cultivation speaks to you, you don’t care about what it might say about you.

The story of allotments could be seen as the story of western society in microcosm. First, we did what we needed to survive. Second, we acquired for the sake of acquisition, mindlessly consuming. Third, we turned to non-material goods but still bought them like good customers. Finally, perhaps we will come to enjoy what is good for its own sake. That would be a victory worth digging for.