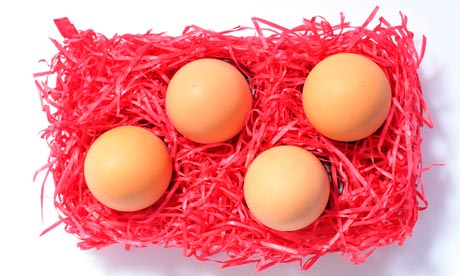 Few consumers realise that millions of day-old male chicks are killed as part of the process of egg production – even in ethical systems. Photograph: Alamy

The market share of free range eggs has increased significantly over recent years as more consumers become switched on about the ethics of egg production. But how many realise that for each of the millions of hens laying ethically-produced eggs, a male chick is slaughtered on day one? In fact it doesn’t matter whether it’s a free range, barn or enriched cage system either: the chick is slaughtered because it’s male, doesn’t lay eggs, and comes from a hybrid designed for egg production and not gaining weight. All this means male chicks are not economically viable as a source of meat either. Destruction on day one, or near enough.

The male chick scenario must be an issue in the commercial sector: according to a recent report there is some significant research being applied to the genetic modification of chickens to identify female embryos within the shell by making them fluoresce under UV light. Then the males can be disposed of prior to hatch: this removes the need to destroy millions of male chicks, and saves both money and the greenhouse gas-emitting resources expended to incubate the eggs.

If it’s possible to put aside the ethics of killing male embryos and any opinions you may hold on GM, it could be a solution. To me, though, it’s sidestepping the issue. Germany has animal protection laws that prohibit the killing of vertebrates without “reasonable cause”. It has managed to get around the issue by marketing the dead chicks as animal feed for reptiles and raptors. There is however a tide of intolerance rising against the “mass murder” that’s driving support for improvements to ethics in egg production.

It’s interesting to see that Lohmann Tierzucht have been taking consumer opinion seriously too, and are trying to find a solution. (Who are Lohmann Tierzucht? They are the German-based breeders of the Lohmann Brown chicken, one hundred million of which have filled our egg laying facilities in the UK in the last decade). Lohmann tried to develop a breed of chicken where the females lay well and the male offspring have good table properties so they can be raised as meat birds, as a way of ensuring that no animal is killed without reasonable cause.

It’s interesting to see that the real value of dual-purpose chicken appear within the industry. To a smallholder, the dual purpose bird iseconomically sensible and ethically sound: nothing is wasted. Lohmann Tierzucht faces the same compromise that the smallholder makes when using dual-purpose breeds; the hens tend not to lay as many eggs (nor are they as large) as their purpose-built layer cousins, nor do the males reach table weight as quickly as their broiler buddies. It’s a compromise that the smallholder accepts, but to the producer it means increased production costs, reflected in a higher price tag for both eggs and meat.

Lohman Tierzucht has met with some consumer resistance to the idea. It will be interesting to see if this is a change people are willing to pay for and support – or are egg ethics all well and good only as long as you can afford them?

• This post is part of a series on poultry keeping from Andy Cawthray, a self confessed chickeneer who writes for a number of magazines, provides talks & courses on keeping poultry at home and shares his experiences on his personal blog TheChickenStreet.