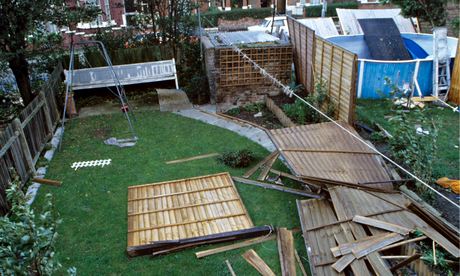 Floods and train delays we are used to. We even embrace them, I sometimes think, as an occasion for a bit of ostentatious stiffening of the upper lip. Another product of the winter storms, though, is far more troubling to the British. Where have all the fences gone?

Actually, we know the answer. They blew away, or at least blew down, and now they’re rotting on the patio. What we don’t know, perhaps, is how to live without them. Because at the moment, when people visit their local DIY store for a replacement, they are being taken to the back office, sat down with a cup of tea and told the news: there is a national fence panel shortage.

To a lesser extent this has happened before, such as after the storms of 2007, but it is worse this time – partly because we have had worse weather and partly because it coincided with a building boom. One of the country’s main fence-panel manufacturers, Forest Garden, has hired 100 new staff in order to increase production, but it still can’t get the wood in fast enough. Sales director John Gomersall told reporters that demand is “upwards of five times the normal level – and still increasing”.

Naturally, retailers have put their prices up, often with warning notices, that is if they can get any stock at all. There is even talk of fences being stolen from people’s gardens in the dead of night, and £20 panels quietly changing hands for £80.

As a result, there are currently a lot of gardens – no one knows exactly how many – where neighbours cannot avoid seeing each other as they venture out again for spring. In extreme cases, they may even have to speak. Conventional wisdom tells us the British find this quite traumatic. If an Englishman’s home is his castle, then his fence panels are his moat.

Certainly as a nation we do seem to have a fetish for privacy, which makes us specialists in its side effect, social awkwardness. This is after all a small island with a lot of people on it, and in A Little History of British Gardening, Jenny Uglow has written about how that bred a national obsession with owning land, and thus our famous (but perhaps now dwindling) attachment to our gardens.

So if your neighbour seemed a little tense through the gap in the fence this morning, go easy on him. Be British about the situation: nod good morning, keep calm … and order those new panels straight away.