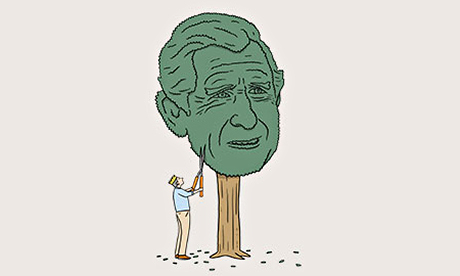 I find it hard to believe that I have been at Highgrove for 34 years. I had always imagined I would have been in Buckingham Palace decades ago, but there is no accounting for one’s mother’s appalling selfishness. It’s that same short-sightedness that has seen so much of the countryside laid waste by the fashionable vandalism of modern architecture and farming practices, so I am proud to have created a small part of Britain that will, forever, be in the 17th century.

January. If you look through the elegant gates of the Sundial garden, tastefully topped with the Prince of Wales’s heraldic feathers in burnished bronze, across the frosted meadows in which rare breeds of cattle graze deferentially low to their Royal Saviour, you can see Tetbury church. When Charles first moved to Highgrove, the church was hidden out of sight behind some ancient, sacred ash trees, so his Merciful Bountifulness had the church moved 25 yards to the left. Such is His attention to detail.

February. At this time of year, many gardens are spiritually at their bleakest ebb, but the magnificent Stumpery – a tiny 25-acre plot that was single-handedly created by His Royal Highness along with 32 flunkeys – is a quite extraordinary space that has already been Grade II-listed. In it, alongside the phlox Abdicata regina, is an old Antony Gormley statue the Prince didn’t want and a section of the Elgin Marbles given to him by his father. The result is a mystical and olfactory sensation.

March. As the cold weather slowly makes way for spring, the garden begins to burgeon into a veritable cornucopia etc, etc. In the cottage garden, the beautifully carved Indian doors that his Royal Highness found round the back of the Taj Mahal offset the important bronze “The Daughters of Odessa: Martyrs of Modernism” that was given to Charles by the whole of the United States of America for his tireless work promoting pastiche neoclassicsism. Be careful not to miss the rare crocus Tamponia camilliensis.

April. Should you be fortunate to be important enough to be allowed to use the front drive, you will see the meadow that the Prince has healed. In it are thousands upon thousands of narcissi that have spontaneously self-planted themselves to create the message, “Thank you Sir, for gracing us with your noble vision.” Listen carefully and you can hear the skylarks chorus, “Hallelujah, Prince of Faiths”.

May. When the Prince is confronted with a problem, he is never afraid to seek advice from professional bodies. Amazingly, their chief executives always pop round to offer help within 10 minutes. If more gardeners were prepared to go to the same lengths, the countryside would soon be restored. Fifteen years ago, Charles was concerned about the health of an ancient cedar of Lebanon. Sadly, despite hundreds of thousands of pounds of the finest intensive care, the tree could not be saved. Thus it came to pass that on that site, Charles has had constructed a vast multi-faith memorial at which Bono sings each summer solstice.

June. The rare fritillaries that were a gift from environmentalist and sex guru Sting are now past their best, but in the dovecote, which was a gift from the sultan of Oman, the fledglings are starting to take flight etc, etc. With just 35 bedrooms, three ballrooms and set in a mere 10-square miles of parkland, Highgrove is not an ostentatious, property, and, in the warmth of summer, its cosy intimacy frequently moved the Duchess of Devonshire to tears.

July. The Prince of Wales does not like to have his summer evenings disturbed by noise. So petrol-engined gadgets are banned, and the only sounds that interrupt the chinking of martini glasses are the click-clicking of staff cutting the lawn with scissors and the swishing of besmocked peasants scything the many hundreds of acres of apple orchards. Woe betide anyone who accidentally damages the magnolia given to the Prince by Pierce Brosnan.

August. The rose pergola is the retreat personally created by the Prince with help from the Dalai Lama. Sculpted into the grass are the six Platonic elements of Earth, Water, Air, Fire, Ether and Royalty, which lead naturally into the Mediterranean garden.

September. While dictating furious letters to government ministers, Charles likes to contemplate the natural environment in the Azalea Walk at the end of which is the moorish doorway under which he personally endorsed the fatwa on Salman Rushdie. Over in the corner of the Carpet garden can be seen one of the Easter Island statues, personally looted, I mean donated, by grateful foreigners.