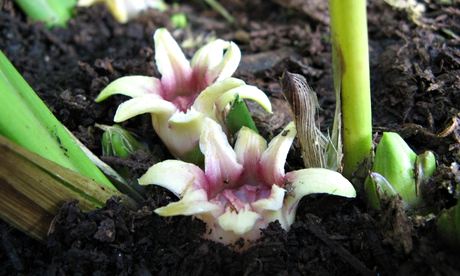 The diminutive flowers of the tall and stately Aspidistra attenuata. Photograph: Ben Ram


Grandma’s aspidistra has been in the family for 50 years this year. Given to her by a friend, this plant of Aspidistra eliator had just two leaves, but now resides in a very dark, dry spot at the back of my garden. It has a leaf for almost every year it’s been in the family.

I don’t completely neglect my grandma’s aspidistra, by the way. It is placed in that far corner of my garden for a reason. In the wild they often hail from seasonally dry areas where they grow in the deep shade of forests. In fact the best aspidistras I have ever seen have always been the ones growing in deep, dry shade. The spot where it grows has high levels of trace minerals in the soil, which helps to stop it from getting tip-burn; a problem faced by many an unloved aspidistra. It is protected from strong, cold winds, which stop those glossy green leaves getting tattered. Because it puts most of its growth on during the autumn and winter, I find myself walking to the farthest corner of the garden at a time of year that I otherwise wouldn’t. 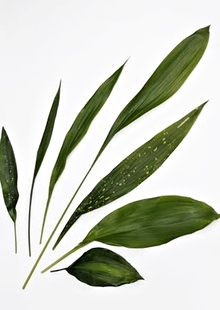 
Aspidistras and their closest relatives have evolved in recent years from the cast iron plants of dark Victorian billiard rooms (and my Grandma’s hall) to being a group of plants fit for the garden. As long as you give their positioning a bit of thought, they will reward you with lush foliage in situations unsuitable for many other plants. What’s more, there is huge variety to be found within their tribe.

Originally named by British botanist John Ker Gawler in 1822, the family’s taxonomy has a confusing past. It was once in the same family as lilies and has also been linked to arums. The Botanical Register, Vol. 8 was published in the same year the family was described, and states: “We have ranked Aspidistra in the above natural order not knowing any more suitable place for it”.

It now finds itself in a sub-family of the Asparagaceae called the Nolinoideae; a family named after 18th century arboriculturist, Abbé C P Nolin. It shares the family with a whole host of other unique and interesting plants. Lily of the valley (Convallaria majalis), another plant grown by my grandma, is also a member of the Nolininoideae, along with other garden favourites such as Ophiopogon (lilyturfs), Polygonatum (Solomon’s seals) and Sanseveria (Mother in law’s tongues). Who would have thought that all of these plants where related?

New members of the Nolinoideae are being discovered regularly, as countries such as Vietnam and Burma open their doors to the world. Since 1980 the number of species of aspidistra has increased from a handful to over 100.
There are many aspidistras in cultivation in the UK and new ones are being made available all the time. For something tall and stately with narrow strappy leaves, try Aspidistra attenuata or A hainanensis. 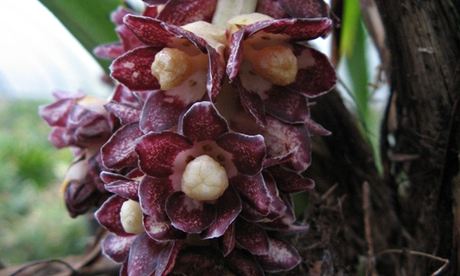 
If, however, you want something a little smaller, there is A. minutiflora, again with strappy leaves. Another smaller one, this time with broad leaves, is the naturally occurring form of A zongbayi called ‘Uan Fat Lady’. There are spotty leaves, stripy leaves, narrow leaves, tall leaves and rounded squat leaves. The one thing that brings them all together is their love of dry shade. They flower too: not in a glamorous and brightly-coloured way, but more of a “get down on your hands and knees with a magnifying glass and wonder” way.

If it is flowers that you are after then why not try some other unusual members of the Nolinoideae? Tupistra, for instance, is slightly more floriferous. Its weirdly-shaped blooms are held more noticeably and arise, creature-like, from the leaf axils. The name Tupistra comes from the Greek word for mallet, Tupis, and refers to the mallet-like stamens of the flower. Tupistra tonkinensis is worth growing not only for its strange flowers but for the amazing shiny orange fruit that follow.

Rhodea a genus of 17 species, is closely related to Tupistra and similar in its habit. Try Rohdea japonica for its really weird flowers and red fruits. Grow it in a shady, protected spot – by protected, I mean both from slugs as well as hard frost.

Then there is Reineckia, a plant I use as a fallback for times when I cannot think of what else I can use to fill in a gap. It is perfectly tight ground cover for moist but not wet shade and creates a mat of lanceolate leaves to 20cm, which are interspersed with small white flowers in late autumn and early spring. 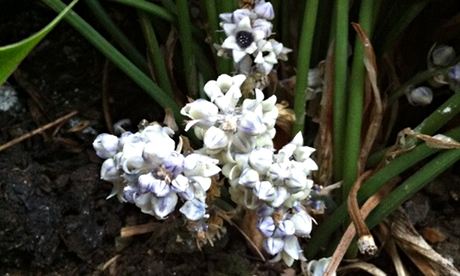 
Peliosanthes, with its pleated, papery, curling, aspidistra-like leaves, never fails to grab my attention. The first thing I do when I see one is rummage around in the plant to find its exquisite, jewel-like flowers or odd fruits. Another for a moisture-retentive site, it isn’t as hardy as the rest so will need to be kept frost-free. I grow my plant in a corner of my bathroom and it is definitely worthy of a space in the greenhouse. Meanwhile grandma’s Aspidistra keeps on thriving; it outlived her and I reckon it may outlive me.