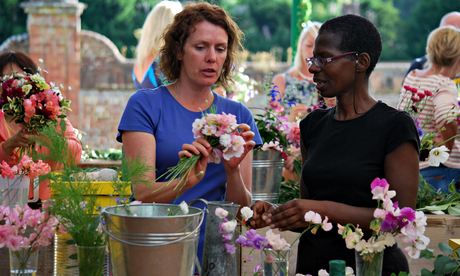 The Great British Sewing Bee has finished. The Great British Bake Off is still months away. And, as nobody at BBC2 had the foresight to commission a programme entitled The Great British Frilly Bunting Bonanza to ease the middle-classes through this treacherous scheduling gap, all hopes have fallen on The Big Allotment Challenge.

That’s not necessarily a bad thing. In the space of an hour, episode one of The Big Allotment Challenge went to great lengths to teach us all manner of important lessons. Here’s what I managed to glean:

These were the first words spoken by host Fern Britton – and we needed this. It’s the sort of impressive-sounding initial statistic that TV shows use to justify their own existence. Three-hundred-and-fifty-thousand! That’s roughly 0.005 allotments per person. Fern missed a trick by not telling us how many football pitches all these allotments would cover, but she’s new to this. Maybe next time.

2. The BBC are brave enough to stray from the format just this once

Unlike Sewing Bee and Bake Off, where finished products are knocked up in an hour or two, The Big Allotment Challenge takes place over 15 weeks. Here, contestants – or allotmenteers if we really have to – slowly but surely grow their produce from scratch. This has a weird effect on how the tasks are presented. We start at the end, where the judge says: “Show me your best radishes”. Then we flash back to week one to see the contestants painstakingly planting their radish seeds. Then we flash forward again. Then back. Then a little bit forward. Then back again. It’s like watching an episode of Lost, albeit one that harbours a strange preoccupation with jam.

3. It has the best-named judging panel on TV

The show’s judges include the spectacularly named duo of Jim Buttress and Thane Prince. Buttress is already a star in the making, adopting the Len Goodman role of avuncular critic, but Prince also manages to make a briskly no-nonsense impact. There’s a third judge, but he has an average name so we won’t linger.

5. There are already plenty of ‘characters’

• Kate and Eleanor (who treated their allotment to the gift of llama poo)
• Alex and Ed (the worm fanatics)
• Harshani and Edd (who like yoga and to chant at their plants)
• Sally and Michelle (who like to garden while dressed as peak-era Lily Allen)
• Gary and Pete (who look like a hipster ZZ Top tribute act or an excessively depressive Proclaimers, depending on how kind you’re feeling)
• Shirley and Victoria (who I’m pretty sure fully hate each other)

• “We wanted a show carrot, we got a show carrot”
• “I’ve got general radish worries”
• “Hardening off”
• “Erect stems”
• “It depends on the thickness of your bottom”
All of these are ready and willing to be run into the ground by an overzealous presenting team until all joy has dissipated and there’s nothing left but darkness.

6. The series is basically an allegory for mankind’s forlorn impotence in the face of Mother Nature’s raging howl

It’s clear that all anyone wants here is total dominion over the elements. And yet, time and time again, their efforts are thwarted by manifest atmospheric variables. The Big Allotment Challenge teaches us that we are all but microscopic dots, helpless against the powerful whims of botany, the planet and creation. It teaches us that existence itself is a well-constructed lie kept afloat by humanity’s collective hubris.