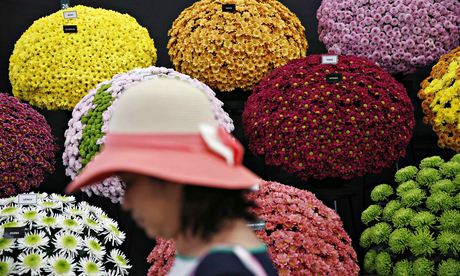 A visitor looks at a display of chrysanthemums at the Chelsea Flower Show in London. Photograph: Suzanne Plunkett/Reuters

William Shakespeare, Richard II (c 1595)
The queen listens as a notably brainy and eloquent gardener and servant compare their tiny domain to the state of England – “our sea-walled garden, the whole land,/ is full of weeds, her fairest flowers choked up”.

Andrew Marvell, “The Garden” (c 1652)
The outstanding baroque garden poem (“nor white nor red was ever seen/ So am’rous as this lovely green”), though Marvell’s “Upon Appleton House” has its advocates too.

Alfred Tennyson, “Maud” (1855)
Tennyson out-Keatses Keats’s garden poems in sensuality as the love-struck speaker coaxes Maud into a garden where “the woodbine spices are wafted abroad,/ And the musk of the roses blown”.

Lewis Carroll, Through the Looking Glass (1871)
“O, Tiger-Lily, I wish you could talk!” says Alice in the Garden of Live Flowers. “We can talk,” it replies, when there’s anybody worth talking to.”

Frances Hodgson Burnett, The Secret Garden (1911)
Children’s classic in which Mary, the orphaned heroine, not only finds a key to her uncle’s locked garden but a small boy with a spinal injury who is being kept hidden away. Together she and the garden restore his health.

Virginia Woolf, “Kew Gardens” (1919)
Available in Selected Short Stories, this piece observing four couples (and a snail) at Kew in summer as they move past a flowerbed resembles an animated version of a painting by Renoir, Monet or Seurat.

Rumer Godden, An Episode of Sparrows (1955)
Godden’s heroine Lovejoy is reminiscent of Hodgson Burnett’s Mary, but instead of discovering a garden she creates an island of beauty, with the help of other local children (the “sparrows”) in a dingy London street in the postwar austerity era.

Philippa Gregory, Earthly Joys (1998)
Centring on the great early 17th-century gardener John Tradescant, who had access to court via his patrons Cecil and Buckingham; in Gregory’s sequel, Virgin Earth, his son becomes gardener to Charles I and emigrates to Virginia during the civil wars..

Elizabeth Gilbert, The Signature of All Things (2013)
The Eat Pray Love author’s novel is the story of Alma, a 19th-century botanist and bookworm whose avid search for love, plants (particularly mosses) and experience takes her from her native Philadelphia to Kew, Amsterdam, Tahiti and Peru.