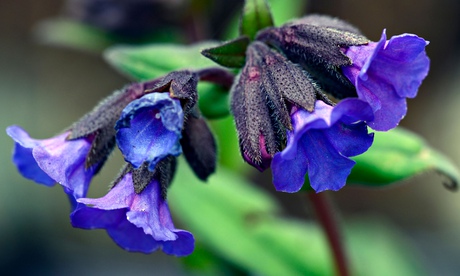 I have just picked a posy of the first flowers to bloom. You can delight in a jar of them, and in searching them out at the end of winter. There are cherry plum with tiny, bright flowers which have the scent of almonds, and primroses smelling of only themselves. I have a suspicion that the sweet violets growing by the house are a florist’s selection that were once grown here when this was a market garden. Larger-flowered and longer-stemmed than those on the sunny banks, they appear spontaneously in the lawn. Bury your nose in them and you can smell them once, perhaps twice, as is the way with violets.

Early flowers always have joy in them, and this is why I have been slowly studding the banks behind the house with bulbs and catkin-bearing trees and shrubs: hazel, alder and pussy willows – the first of which into catkin is Salix purpurea, with its tiny, dusky pussies. The enormous catkins of Salix candida have joined them now. They are alive with bees on a sunny day, when they turn from silver to gold and break into flower. I have planted lungworts at their feet as the bees love to work their profusion of flower. 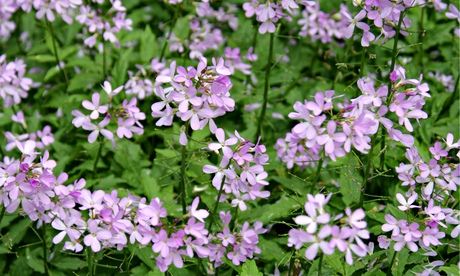 
The lungworts like it here, the heavy soil favouring their preference for moisture-retentive ground, but the pulmonarias are easy as an understorey to deciduous shrubs or in a quiet corner as long as it doesn’t dry out completely. “Blue Ensign” is as blue as gentians, but the range is wide, moving to the soft red of the first to flower, P rubra, and on to pinks and mauves. “Leopard” combines both, while “Cotton Cool” is a pale icy blue and “Sissinghurst White” is clean and sparkling.

Their leaves, shaped like a lung and thought once to be good for them by the apothecaries, are one of their great attractions. The elongated leaves of “Highdown” are freckled with pale spots while the foliage of P saccharata is marked so definitely that the leaf looks as if it has had silver leaf applied between the veins.

In a similar camp and favouring much the same conditions are brunnera, with forget-me-not flowers and rounded foliage. “Langtrees” has a subtle spotting while “Jack Frost” is almost entirely silvered. I like the plain green leaf of the white-flowered “Betty Bowring”, and will often team them with the yellow Epimedium “Fröhnleiten” and Narcissus “Jack Snipe”, to soften the brightness of spring yellow. 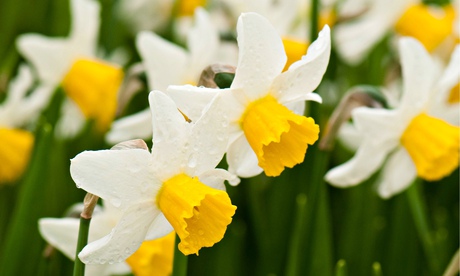 
Many of the early-flowering perennials are not only good for being there to bridge winter and spring but also for their ability to seize the window before the leaves pop on the trees. To cope with the ensuing lack of light many have a short lifecycle. Lathyrus vernus, a pea with rich purple-blue flowers, and Cardamine quinquefolia, wood anemone and celandine are mainstays in this window. They act like a starting gun for the rest of the flowering season, and allow you to breathe easy in the knowledge that winter is now firmly behind us.