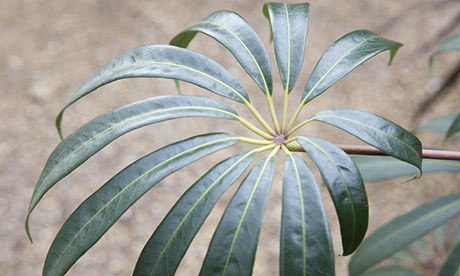 Schefflera taiwaniana has slowly increased in popularity since it became available in the UK in 2004. Photograph: Exotic and Botanical/Alamy

For the past few cold wet weeks I have been collecting and sowing Schefflera seed, a process that will continue right into the depths of winter. Umbrella trees, as Scheffleras are commonly known, come in different shapes and sizes: tropical-looking trees, shrubs and even climbers – all produce small black fruit. I get to grow many of them in my job as propagator and gardener to plant hunters Bleddyn and Sue Wynn-Jones at their nursery, Crûg Farm Plants. As often as I hear people saying “wow” about them, I also hear the words “I could never grow them in my garden”. 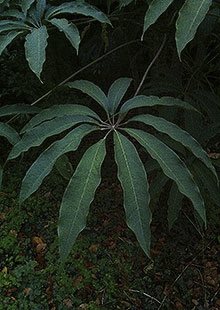 
I want to help people come around to a different way of thinking about umbrella plants: I want to step in and tell them they are just giant ivy plants. They come from the Araliaceae family, which contains a host of plants that have become commonplace in British gardens. Fatsia japonica, the false castor oil plant, is a member of the family and not many worry whether it is going to be hardy enough any more. Common ivy (Hedera helix) is also a member of this family.

Admittedly, Scheffleras aren’t all hardy. There are well over 500 species worldwide, and I certainly wouldn’t recommend someone go and buy a little variegated Schefflera arboricola (umbrella plant) from the supermarket or DIY store and plant it in their garden. However, species such as S. rhododendrifolia and S. taiwaniana are proving reliably hardy here in the UK given suitable conditions, and have coped very well with everything the past 20 years has thrown at them. 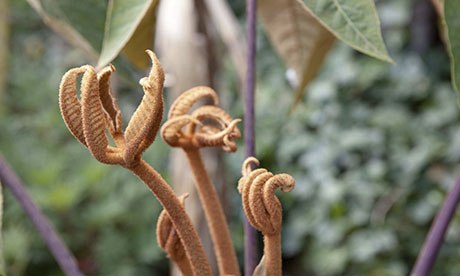 Schefflera macrophylla is a monster of a plant with huge multi-fingered leaves up to a metre across. Photograph: Andrea Jones/Alamy


There are umbrella trees to suit everyone. If you have a really sheltered spot, why not try Schefflera macrophylla, which reaches heights of more than 8m in some Cornish gardens. There are species with tall slender stems, topped with a perfect parasol of exotic two-tiered leaves, such as S. hoi and S. fantsipanensis. I have to say that my personal favourite is S. alpinia, with its purple new foliage, red leaf stems, elegant habit and its ability to survive -15C to boot.

And umbrella trees are fantastic for wildlife. Just like their relative the common ivy, they flower very late in the year when little else is on offer, and provide much-needed nectar to bees, wasps and butterflies. In the depths of winter their black fruit, also just like ivy, is a favourite of our gardens feathered friends such as thrushes and blackbirds.


Many species were introduced to British cultivation back in the heyday of plant hunting; the genera’s history goes all the way back to Captain Cook’s second voyage of exploration. A species of Schefflera was collected in New Zealand, described formally on Cook’s return, and named in honour of the 18th century German botanist Jacob Christian Scheffler. The Victorians considered them tender and kept them in heated glasshouses. In 1965, a seedling of S. rhododendrifolia was brought to Argyll from Nepal by Sir Peter Hutchinson. He planted it outside where it has since become a 10m tree. The age of the hardy Schefflera was born. It wasn’t until about 20 years ago that more hardy species of Schefflera were brought into cultivation in Britain, this time by a modern plant hunter, Edward Needham. Although he was the first to collect S. taiwaniana, it was Bleddyn and Sue Wynn-Jones of Crûg Farm Plants who made it widely available. When they first released stock in April 2004, plantsmen from far and wide came to queue at the nursery gate in North Wales. From then on in they have slowly increased in popularity.

So, what’s the trick to growing one of these Scheffleras? As architectural as they may seem, you must resist the urge to plant one on its own, as a feature, slap bang in the middle of a border. They like company: other plants around them provide the required shelter and humidity. Don’t plant them out until they have a bit of toughened wood on their stem, because young plants are not as frost hardy as older ones; most will be ok after they get to about 1m tall. Protect them from cold wind. They can cope with just wind, they can cope with cold too. Both together and their handsome evergreen leaves and new growing tips will get badly scorched.
And consider your plant’s provenance: seed collected from plants growing in colder or higher places will be hardiest, and could mean the difference between them surviving the winter or not.

So as I continue with the painstaking job of collecting and sowing Schefflera seed, I wonder – are you still thinking that you couldn’t grow one in your garden? I very much hope not.

Robbie Blackhall-Miles is a modern day plant hunter’s propagator and gardener. He is personally interested in ancient families of plants and blogs about these on his website fossilplants.co.uk. He also tweets as @fossilplants.