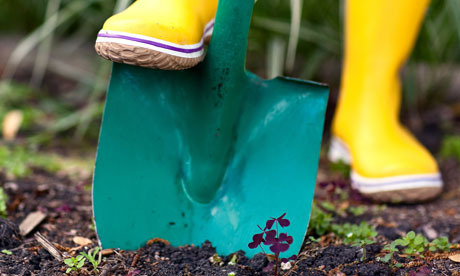 It has been three years since we turned to Dig for Victory, creating a wartime garden to help us survive redundancy and a crippling mortgage.

That’s three years of turning the soil, adding organic matter and growing crops in an intensive way. We’ve grown in open ground, pots wired to fences, old tyres, in hessian sacks and in between our flowers. Thousands of kilograms of fruit and vegetables have passed through our kitchen to be eaten or preserved. Last year there was a bumper crop of tomatoes: trug after trug of green and red fruits came into our house; we’re still eating the preserved ones now.

This year, though, the garden has started to show the telltale signs of something wartime gardeners feared: erosion and depleted fertility. A wet winter lead to dug beds becoming compacted and in some cases washed away in the deluge. We looked for solutions and mulched heavily with compost and manure, something we discovered from watching Geoff Hamilton’s Cottage Gardens and embracing the writings of no-dig gardener Charles Dowding.

Like Dowding, we are moving toward minimum tillage. Being on a hillside will always mean that we battle against soil erosion. The Pennines are the most eroded area in the UK. The moors the Tour de France cyclists rode through are the result of deforestation. The moment the trees were felled our farming ancestors were on borrowed time as topsoil was stripped bare by winds. These hills are now home to sheep, the cycle of liming and the destructive practice of silage. We continue to compact and erode what is left of our precious Pennine soil.

Farmers and gardeners know so little about soil and we all buy into knowledge passed down from generation to generation that could destroy our food chain. We are starting to see this now in Spain and Italy, with the rise of bacterial diseases in olive orchards and the desertification of farms. This is soil erosion in practice and wet winters in the UK will lead to our own desertification and no chemical will save us from that. We took an intensive organic growing course with the Kindling Trust where we learned about the importance of leaving no part of the soil bare.

In the past we dug in manure in late autumn and left it bare to allow rain and frost to break down the clods. We’re clods for doing this: digging damages the soil and releases carbon. The manure we all dig into our plots in late autumn has little or no effect on the plants the following spring because the nitrogen is washed away along with some of the topsoil. Some gardeners also dig in manure that is less than six months old, meaning that they are potentially adding E coli to their soil and their food chain.

We have learned that manure is not the only answer towards minimum tillage; we now sow red clover in the first week of July. This October we will spread fungal compost – well rotted leaf mould and woodchip from our own garden – in between the clover. This keeps the ground covered but still uses the winter weather to help the fungal compost rot down, adding humus to the soil as the clover overwinters. Six weeks before planting we mow the clover and hoe the roots, leaving the lot to rot down. The manure and green manures have had two effects: increased fertility in the soil and less time in preparing beds.

Digging takes up time, it wasn’t popular during the war and it isn’t popular now. It disturbs weed seeds and finishes off many people who take on allotments. These poor growers clear their plots, dig it over, add organic matter, and tell their friends that they will soon be growing organic carrots. Six weeks later they’re on Facebook, desperate, exasperated and asking what weedkillers will finish off the weeds that are now waist high. As gardeners, we have to look at nature to realise that nature never digs; it decays and lays down layer after layer of humus.

The Dig for Victory campaign helped us to win the war but it left our postwar soil exhausted and led to the rise of monoculture and chemicals. As gardeners and growers we cannot afford to buy into this. We need to learn to love our soil, embrace some weeds and hang up our spades.

• Life on Pig Row is the story of Andrew and Carol Oldham’s move from urban life to semi-urban life in a small hamlet on top of the Pennines surrounded by the Yorkshire Moors.